Since starting in this amazing sport 8 months ago, and with no background in breath holding, I set a goal to reach 100 metres within my first year. As an interim goal I decided to set the first official UK record in the UK. The reason for this was to put British Freediving on the No Limits map and to make my commitment clear to sponsors and potential sponsors.

I have spent a considerable time studying the habits and strategies of people who have become successful in their chosen field, and I strongly believe in setting clear and decisive goals as they offer direction and help to sustain consistent work during the hard times which any sportsperson experiences. Goals also offer a framework for training and give clear feedback information on progress. This allows the athlete to adapt training methods to get the best results. This is particularly important in a sport like freediving where there are so many different approaches to training. Also relevant is the fact that only three people have ever gone beyond 150 metres, so we are still in the pioneering stages of the sport.

With all this in mind I was very privileged to be allowed to train with, and be taught by Loic Leferme, AIDA No Limits World Record Holder, and his mentor Claude Chapuis. The invaluable lessons I learned from these great freedivers have enabled me to lay a solid foundation of physical adaptation and psychological preparation. These two things, I have discovered, are inseperable, particularly in Freediving. Also the philosophy of progression and as Loic says "The way to be in the water" has been an illuminating experience.

Having trained in the warmer waters of Nice for some considerable time this year, the time soon came to be a grown up and organise my own training with my own sled in the kind of water that I’d be doing the record in. With the help and support of my buddies Duncan Chappell and Alun George and help from my diving sponsors Active Scuba and Stuart Tattersall of Dee Sports, I began a series of four day sessions in Dorothea Quarry in North Wales. We invited other freedivers to join us and discovered some great companions who like ourselves want to be in the water as much as possible. Among them were Haydn Welch, UK dynamic record holder and Sam Still who I suspect we’ll be hearing a lot about in the future. John Moorcroft, UK team member also had a great training session with us.

The training trips went very well and although the water was a chilly 9 degrees we did some great dives. We were quite literally on the sled every other week for nearly two months. It cost a lot of money and was a huge effort to keep travelling back and forth and setting up equipment but worth it as dives in the 60 metre range started to feel really easy. The training was paying off. Alun, who took so much time off work to help me train and to be in the water has progressed enormously on the sled, reaching some very impressive depths. His equalisation has improved so much that his constant weight and free immersion diving has also taken a considerable leap forward. I thank Duncan for taking time out during very important exams to help with my preparation.

As my depth increased, at a progressive rate I took on a sponsor in the form of the Underwater Centre in Fort William, Scotland. Although the conditions would be even tougher than Dorothea I decided to go for the record in Loch Linnhe. Freezing cold and extremely dark.

By this time money was running out. My sponsors have given me some nice equipment but sadly no money…yet! So as my life savings melted into oblivion the event was organised. The BFA did not have a criteria for No Limits Freediving in their rule book. They set about providing that criteria with much work from Ben Gowland and Steve Fuller in particular. The judges who kindly gave their weekend to adjudicate the event were Steve Fuller and Rodin O’Hagan. My safety freedivers were Duncan Chappell and Alun George. The Underwater Centre supplied safety scuba divers, a tug and a RIB, medical cover and accomodated and fed us in good style during our stay. My thanks to Don and Lisa McGregor and to Ron Mahoney of 990 magazine.

I drove to Scotland with my sled and equipment and the rest of the team met me on Friday night. On Saturday morning I briefed the safety dive team, boat crew and medics. Working to a timing schedule which I set out to allow us to dive in slack water, we kitted up and set out to the tug which was moored 1km out in the loch. The weather was a bit windy and the water was very cold. The judges attached two Suunto D3’s to my left ankle and after my usual warm up and preparation the deepest trimix safety divers left the surface and I got on the sled. We gave them five minutes to get in position and settle themselves down. At about 11.00 I released the brake and began my descent. I was aware of the water temperature which felt colder than Dorothea Quarry. Equalising went well and I had to deliberately relax my shoulders and neck which were tensing up due to the increasing cold. The sled hit the bottom weights with a jolt and I opened my eyes to see two torch beams shining at me from the safety dives. It was so dark that I could not make out their body shapes at all. I felt very relaxed and comfortable. Although aware of the effects of some nitrogen narcosis, it was only mild in spite of the cold. This was due in part to my cold water training before hand. I slowly filled the balloon and gave my divers a big OK sign. I quite deliberately filled the balloon to about three quarters of it’s capacity which gave me a slightly slower start to my return journey. The whole dive felt fantastic and I was delighted that it had all come together on the day. I left the sled at about twenty metres and slowly returned to the surface under the watchful eye of Duncan and Alun. Felt great at the surface and indicated that to the judges and video cameraman.

On checking the D3 computers the judges announced a UK Official No Limits Freediving record of 76 metres. This is just the start for me, but I couldn’t have done it without the help and support of a great team…Thank you!

Looking ahead, I’ve been in close communication with the great Pipin Fererras. He has been following my progress with some interest and has offered to give me personal coaching and support to reach my interim goal of 100 metres. Pipin has kindly given me a personalised training schedule which I’m working very hard on right now. On the 5th of June I’ll be travelling to Miami to work for two weeks with Pipin, after which time I will attempt to establish an IAFD British Freediving record of over 100 metres. This will take place on 17th June 2002. I’m very excited about this opportunity, in particular because June will be just 9 months on from my very first day of freediving. It’s incredible to think that this time last year I had not even heard of freediving. I’m extremely grateful to Pipin for offering to help and teach me, and for offering his safety dive team, sled and boat for my attempt.

You can follow my progress in Miami here at Deeper Blue, who are doing an exclusive report on it and on my own site at www.ukfreediver.com. 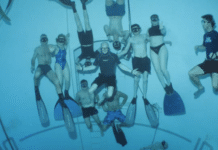 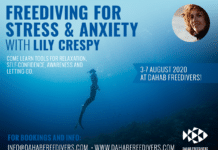