West Bay, Grand Cayman, BWI – With two competition days, two World Records and two National records in the bag for this year’s Performance Freediving Sink Faze event on Grand Cayman Island, it is worth having a look at the marine infrastructure that’s required to support these dives.

The dive site is about 1,200 meters offshore of Grand Cayman’s fabled Seven Mile Beach. The depth has been about 243m/800 ft – the Cayman Wall is a genuine precipice. The event flotilla consisting of Crew Boat, Spectator Boat and Evac Boat motors due south from the West Bay dock, and the Crew Boat locates and ties up to a mooring line anchored at the edge of the Wall.

The Crew Boat is tied off stern-to-the-wind, that is, with the bow pointing west, away from the shore. The Spectator and Evac boats maneuver to optimize the view and rapid access, respectively.

The dive rig is then deployed off the bow of the crew boat by support freedivers. 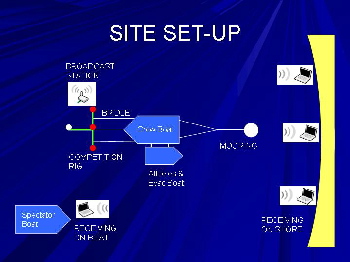 The basic deployment shown in the diagram above is subject, of course, to weather conditions and ocean currents. The Crew Boat can, for example, be cast loose from the mooring and allowed to drift free, along with the dive rig, although not for too long – next stop downwind is a long, long way. Drifting free can mitigate the effects of bottom currents on the dive line, which otherwise can be distorted into an arcing ‘C’ shape: unacceptable for record freediving and dangerous for freedivers and support divers alike.

The dive rig is based around a T-shaped frame assembled in-water from aluminum tubes, floats, lines and hardware. The centerpiece is the counterbalance safety/rescue system. 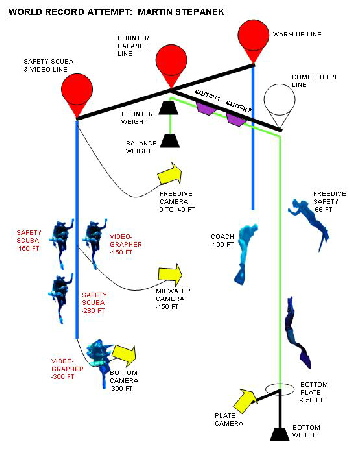 When the first competitor enters the water and begins to warm up, a countdown begins. The rebreather safety divers and videographers descend on specified counts and all fixed and hand-operated cameras roll.

It’s roughly equivalent to a platoon -scale military operation in terms of logistics, hardware and maneuver.

Tuesday, April 4 will be a day off for most of the crew, but a light training day for Mandy-Rae. The live video feed from the 3-camera Hi-Def system deployed by HD Odyssey functioned today, with signal going wirelessly from the Master Control Dinghy to a laptop on the Crew Boat. Next step – a shore receiver that pipes live video images to you via the internet ! Stay tuned.

An overhead look at the dive site can be seen here.