The Eighth Wonder of Freediving

Dubai, one of the seven emirates that make up the United Arab Emirates, has a vision. Governed by His Highness Sheikh Mohammed bin Rashid Al Maktoum, Dubai boasts the largest building in the world, the largest aquarium in the world, the most expensive hotel in the world, an indoor ski slope with real snow, and a series of man-made islands (The Palm Islands, and The World Islands) the latter shaped into the continents of the world and that can be seen from space.

As you drive down six lane highways, dwarfed by construction on the most incredible and inventive scale, you pass billboards announcing the next project as ‘The Eighth Wonder of the World’. It seems unfair to bestow this label on just one building or one project; Dubai itself is, arguably, the eighth, ninth and tenth wonder of the world, all tossed into one giant, fizzing, melting pot of nationalities, technology, artistry, and money. I had arrived for a six-week stay, a wide-eyed West Country girl drinking in a country and culture that has its foot firmly on the accelerator, at the invitation of Sara-Lise Haith of ‘DivasinDubai’. I was the first ever freediving instructor in the UAE and was to teach AIDA courses of all levels. I had also been invited as a guest of the Emirates Diving Association to represent freediving at DMEX, the Dive Middle East Exhibition, and to give a presentation on freediving a couple of weeks later.

The teaching was six days a week and classroom lessons and pool training were conducted at Sara’s building, which was a fantastic location. The pool was open air but always offered some shade and plenty of room for stretching sessions. The waters off Dubai are too shallow for deep freediving, so for the open water training we headed to The Divers Down Centre at Khorfakkan on the east coast of the UAE in the waters of the Indian Ocean.

My twenty-two students were as varied as Dubai itself, with Emiratis, Kuwaitis, French, Lebanese, South Africans, British, Australians, Indians, a member of the Omani Royal Family, and even the bodyguard to the Crown Prince of Dubai. Many were spearfishers, some scuba instructors, and some completely new to the water, with a fear of sharks to boot…

I had visions of the ocean being similar to the Red Sea but had a series of surprises when I first got into the water. The first was the visibility. On the first day, a recce for myself and a chance for Sara and I to test the set-up, I looked down the line and realised that I had more visibility in Vobster, the quarry I teach at in the UK. “It’s a bad day for vis, it comes and goes,” Sara told me, but I couldn’t believe that I had come half way around the world to find worse vis than back home! The visibility did change, however; within a dive session it could go from eight to twenty metres and once you were past the plankton layer, beautiful clear emerald water opened up. 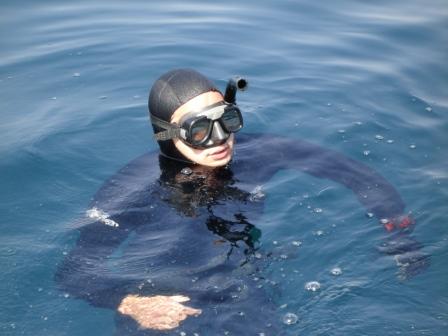 The second shock, or series of shocks, came from a family who hadn’t visited the waters for a while: jellyfish. The dive centre, divers, EDA and locals all told us that they hadn’t seen them for over three years, but as soon as I arrived, so did they, and proceeded to fight for the right to sting any available part of my skin and that of my students. Some were very beautiful, but they wreaked havoc on some students, blowing the lips of one of the boys up like balloons. Needless to say, he wouldn’t let us take a picture…

More harmless wildlife was also a feature of the diving and we were lucky to dive with and see, amongst others, a baby whale shark, a sea snake, fusiliers, morays, mating cowries, sea stars, grouper, Arabian butterfly fish, and a family of black tipped reef sharks. The corals were stunning and the water warm and mostly still as a mirror; a perfect destination for all divers. Midway through the trip we took three days off from our sea training to appear at the Dive Middle East Exhibition, held alongside the Dubai International Boat Show. This was a great opportunity to meet some of the diving centres and manufacturers and also to showcase the skills of Sara, the current Dubai ladies freediving champion… We changed into our wetsuits in a nearby hotel, and then walked in the midday sun past seemingly every stand at the entire Boat Show, our eyes firmly fixed at the horizon and trying to ignore the gaping mouths.

Back at DMEX they had prepared a stand by the water for us, along with a sound system. The crowds had gathered, including the press and TV crews, which was a little daunting. Nerves vanished when I got going, though, and I talked about freediving and breathing, with Sara as the ‘demonstration model’, before moving into the water for Sara to do some breath holds. Paul, the owner of Divers Down, held the microphone for me when I was in the water, and Sara pulled off her breath holds with complete ease and astonishment from the crowd, who we later discovered contained none other than Sheikh Mohammed himself… When we were not staying at the Divers Down Guest room, we were given the run of a private villa that belonged to one of our students. This was in the nearby town of Qidfa, and gave us the opportunity to see some local Emirati life. The villa had a goat, chickens, turkeys, guinea fowls, and a manservant! Situated right on the beach, we were cooked the most incredible curries while we watched men in traditional white robes racing horses along the shore line, fishermen pulling their nets in by hand and scores of beat-up 4x4s. We were also lucky to see part of a local wedding, held outdoors and entirely male. They danced in formation for hours to the beat of a drum, throwing long sticks and antique guns into the air. 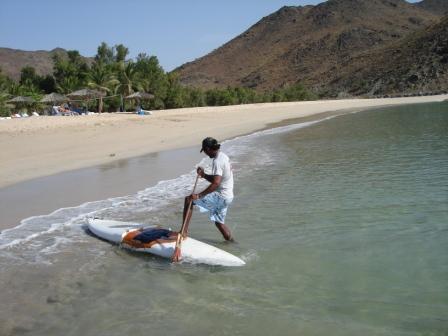 Back from beach life in Dubai, the EDA (Emirates Diving Association), a government organisation, had invited me to speak about freediving at the Godolphin Ballroom at the EmiratesTowers. This was a chance to introduce the sport and some of the physiology to a wider audience and was extremely well received.

It wasn’t entirely work, work, work, as we managed to schedule in about four days for fun activities. One of these included a desert drive, which was amazing. Picked up in town in a 4×4, we headed out to the desert for dune bashing, where the cars drove in convoy up and down the dunes. It was on a nature reserve so the cars followed a specific route to hep protect the environment. We made stops at a camel farm to watch the sun go down and then on to a camp for a meal and belly dancing. The desert was so peaceful and beautiful that it was easy to appreciate why it holds people in its spell.

The other great treat was the Dubai Ladies Club. Built and owned by one of the daughters of the Sheikh, it houses a gym, restaurant, several pools, a beach, ‘personal development centre’ and a spa for ladies only. In a culture where many women are completely covered, this was a place for them to swim and exercise whilst still expressing their religious beliefs. For me, this was a place to be scrubbed from head to toe with Moroccan clay, showered off and then massaged with essential oils. 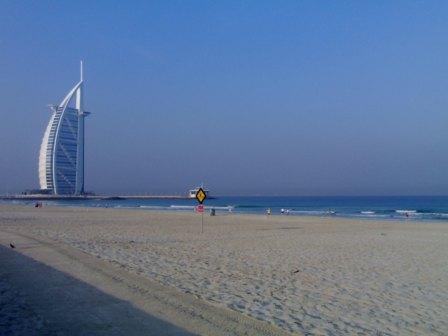 I’ve left enthusiastic divers and two instructors in Dubai and I’m intending to return to teach more courses in the autumn. I know that this is the start of big things for freediving in the UAE and I’m thrilled to have been a part of it. So many thanks to Sara-Lise Haith of Divas in Dubai, Paul, John, Chatura and Nina at Divers Down in Khorfakkan, The Oceanic Hotel and Khorfakkan Youth Hostel, Ibrahim Al-Zubi and Melrose Valencia at the EDA, Emmanuelle Landais at Gulf News, Nadim Majzoub, underwater photographer Christa Loustalot and all my students.

For more information, please visit the links below!