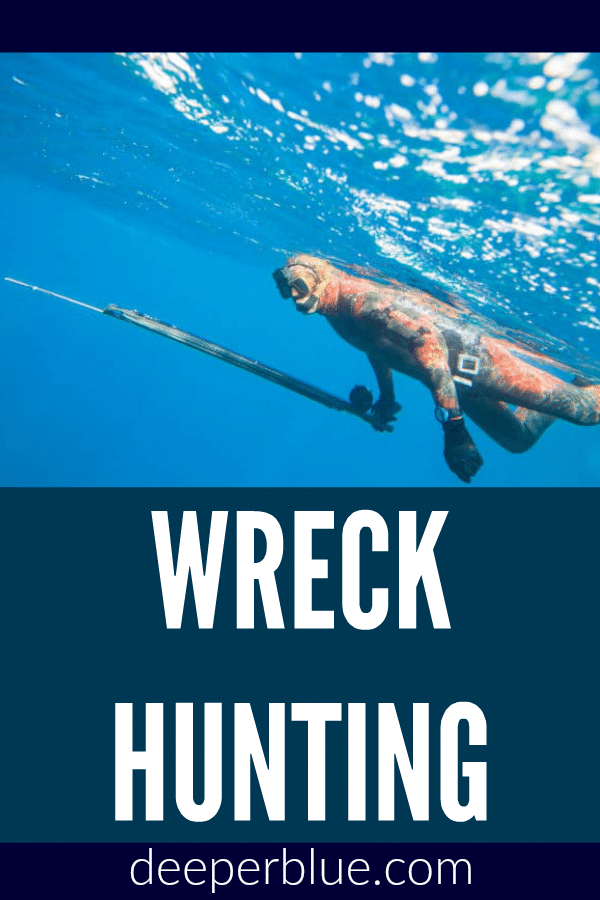 Diving wrecks and hunting fish with spears are two of my biggest joys in the outdoor world, and when combined they are unbeatable! Reefs are beautiful, and other piled or scattered concrete and metal debris are usually effective habitat to support numerous fish life, but there are aspects to shipwrecks that can be very special!

First are the wrecks themselves, various man-made vessels that arrived on the bottom either by accident or by purpose. Natural wrecks may be well known and commonly dove like wrecks intentionally sunk as artificial reefs, but there are many unknown wrecks that are still well-kept secrets by a select few divers. Often non-diving fishermen find wrecks by seeing lots of fish on the surface or on their fish finders, and some by bringing up pieces of wreckage with fishing lines or anchors. Divers are sometimes recruited to inspect and identify newly found structures. It is a unique experience to be one of the first humans to see an unexplored shipwreck on the bottom.

Decades ago a longliner and a sportfishing captain reported to a buddy of mine, the finding of a wreck from the 1800’s, verified by a vintage anchor they drug up near 2 big fish shows in the Gulf of Mexico, off Florida’s west coast. We drove most of the night to the remote location in 190-feet of water, while the captains drank and told lies and treasure stories. They insisted I dive with my massive U/W video camera, instead of a speargun. I videotaped the largest gag grouper I’ve ever seen, maybe 70-pounds, as it swam into a pothole about the size of a trash can and disappeared. It’s amazing how much bait can be attracted to two little holes on the bottom. No wreck was ever found, but I got two giant spiny lobsters on the second dive. Oh well, no treasure but an amusing memory!

One of the hardest things to decide before a wreck dive, is which speargun do you take down? This is due to the tremendous variety of fish species present and the diverse structure of wrecks. I’ve seen powerful bluewater/pelagic species like wahoo, African pompano, permit, cobia, and amberjack that would be best speared with bluewater guns and floats. Or big benthic/bottom species like cubera, mutton & red snapper or black, gag, and yellowfin grouper, or even hogfish that are well suited to long shooting spearguns with reels or multiple freeshafts. It is extremely cumbersome and difficult to take 2 spearguns underwater, but I have done it, with and without success. Usually planting one gun on the wreck for later use, and only hunting with one gun at a time is best.

Wrecks with very high relief from the bottom attract masses of bait and their predators, and I’ve seen the surface and mid-waters so crowded I could not see through them to view the large wreck below, even when the water is crystal clear. As wrecks crumble down, the diving & sportfishing majority get bored with them, which is a good thing for spearos. I’m so glad to see them go dive and fish the new, intact and spotlessly clean wrecks. Less traffic means less pressure, which means better quantities of less-spooky fish for hunters. Also as wrecks lose their relief and surface fish, many fishing and diving captains can’t easily find them anymore, which is just wonderful! I’ve got shrimper wrecks that are nothing but a couple fuel tanks, an engine with a shaft and screw, and scattered rigging. Oh yeah, lots of big grouper and snapper too!

Another thing that often happens to wrecks is separation, especially when there are big storms like Hurricanes or Nor’easters. It’s very rare that a wreck’s intactness improves, like when the Spiegel Grove was uprighted after Hurricane Dennis passed through Key Largo in 2005. Many wrecks have a superstructure or bow break free and move far enough away that divers don’t see them anymore, and captains rarely find them. Sometimes it’s just small pieces like smokestacks or fuel tanks that depart and last a long time. An astute spearo will watch fish that are checking out, and follow as they move to the nearby wreckage. While diving, I often circle a wreck, as far as the visibility allows, and find pieces that smart fish use as a safe room when divers show up. It’s often a good tactic to descend nearby a wreck or portion of one, rather than on top of it, so fish will stay close to the structure. Good captains also drive patterns around wrecks and find new sections or sometimes totally new wrecks. Many artificial reef wrecks are being placed spread out on the same large reef sites, so you can get the bearing and range and cross over if the conditions and traffic allow. Some are placed in a line, and are being called wreck-trecs, or wreck-parks, and are commonly spaced evenly and down current to facilitate divers on drift dives. In non-current areas, they are often laid out north to south or east to west.

My first trip to the Florida Middle Grounds, 80 nautical miles offshore in the Gulf of Mexico, came in early 1982, to a prize wreck visited only once by a private boat. Two buddies and I freedived the upper waters of the site early in the morning, seeing stratified layers of many fish species, and shooting a few amberjacks and a couple good-sized mangrove snappers. After a while, we guessed enough sunlight had penetrated the darkness 132-feet below, where the wreck lay in waiting. We knew only that the ship was old and made of steel, overgrown with corals and sponges, and loaded with grouper! The gear we wore was old as well, just a small air tank, a single hose regulator, a simple BC, a watch and a depth gauge. We each carried a long speargun with no line. We had 10 minutes to drop in, shoot and get out. The wreck was teaming with fish and I saw a nice gag run under a low steel panel amidship, where the hull broke away on a diagonal to the sand. Bottom fish like a wreck that’s twisted and crumpled down better than intact hulls. I recorded “mental wreck hotspot # one!” I lined up on another grouper and let my shaft fly, hitting it high on top of the head, giving it a haircut, and it tore free and slipped into the wreck through the same break. As I reloaded to pursue my wounded gag, a grouper twice the size of any I had ever seen appeared out of nowhere. I glanced again for a flat tail, and it was not a jewfish, but my hesitation made for a late shot, and he skinnied flat to the bottom and into the same hotspot, thrashing and banging until the shaft fell to the sand. I couldn’t see anything in the sandstorm, so I swam straight to the other side of the hull, looking for another view inside. Through a hole, barely bigger than a football, I saw and stoned a gag that looked like the first one, and as I slid him out, sure enough, he had only a single kill-shot. Again I looked in the hole and saw the second gag with the haircut, and my mind raced ahead. If I brained this guy I might have another shot on the monster black grouper! As I shot, he exploded into another sandstorm. I got him out, but couldn’t see a thing in the wreck. My air tank was very low, and it was time to go! Up in the boat, we were pretty proud of our big gags. After checking our Navy tables, which called for a long surface interval, we finally hit the water for round two. There was no 100-pound black grouper to be found on this short back dive, but we got a few more gags and I saw some portholes and a big boiler. As usual, the bow and stern were more intact than amidships, but my best gag to date, nearly a 30-pounder, came from the hollow at the stern, between the keel and the sand, just fore of the rudder. I made “mental wreck hotspot # two!” We dove the “Middle Grounds Wreck” for many years, as did others when the secret got out, and it was always a great dive, but never again like this first trip!

In 2004, I took a friend and wreck researcher, Michael Barnette to the wreck and he soon identified it as the “Gwalia”, a tugboat out of Alabama that sunk in 1925. He also found a ship’s bell, with no name, and recovered several portholes. I was the only shooter on that trip and I got a nice gag, a red snapper and a nice porthole on one quick 10-minute dive. Michael wrote an article with photos in the St. Pete Times that is posted to follow. To date, Michael has identified over 20 wrecks and written three books and numerous articles on shipwrecks. Wrecks can be very cool!