There may be nothing more terrifying than the cry of “Shark!” when swimming in the ocean, but if sharks could, at the first sight of humans they would be shouting, “People!”
Lesley Rochat AOCA Founding Member

As I arrived at Lesley Rochat’s house, up on the slopes overlooking Fishhoek, I could almost sense an inspiration and passion for the ocean, which sits so well with her spectacular views out over False Bay. It’s not easy to get Lesley to yourself for an hour, the executive director and founder of AfriOceans Conservation Alliance (AOCA) is juggling a multitude of projects, and she has only recently arrived back at home from a diving and photography trip to the blue water off Kwazulu-Natal.

Before my visit, I saw Lesley as a woman who had done an enormous amount to promote shark awareness with her project to document the release back to the ocean of Maxine, a ragged-tooth shark who had been resident at Capetowns Two Oceans Aquarium. I had seen a very driven woman who had achieved huge amounts in exposing the media to Maxine’s story.

After my visit, I saw Lesley as a woman that did all of the above, and then some. I saw a woman who was passionate, sensitive, concerned, creative, dynamic…and whose day to day plans went far beyond a large female ragged-tooth shark which now swims freely in the open ocean again, and who’s final human contact was with the petite woman off Struisbaai. 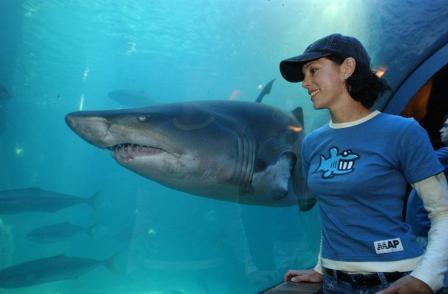 Apart from an ongoing programme with the release and tracking of ragged-tooth sharks from the Two Oceans Aquarium, Lesley is currently working on at least 2 documentary’s with her company, Blue Pulse Pictures. She is writing books, designing shark awareness posters which are already going up at beaches around the country, she is putting together educational programmes and books for kids and schools, and one senses that she is constantly on the lookout for involvement in any projects which will help to increase people’s knowledge of the marine eco-system. How then, did this all begin.

As a young girl, Lesley’s favorite programme was a television series by the legendary Jacques Cousteau, which was screened with the arrival of television in the country. That  was to be the catalyst for a love affair with the ocean. After graduating from the University of Cape Town, she became a model, actress and television presenter, before moving into the lucrative world of corporate insurance. The deep blue was never far from her mind, and as a creative release, Lesley became a recognized travel and environmental journalist, diving and photographing extensively around Africa and neighboring islands. Her production company Blue Pulse Pictures was formed, and under this banner she visited the Two Ocean Aquarium in Cape Town and in a small moment of fate, as she stood in front of the predator exhibit, her gaze fell on a scar behind the gill of Maxine, a 200 kg female ragged-tooth shark, and the aquariums star exhibit.

Lesley enquired about the scar, and that story set in motion a series of events which would culminate in Maxine’s release.

Maxine had been entangled in shark nets off Durban, on the east coast of South Africa. Fortunately, the Sharks Board had found her, and after a routine inspection, had released her. 90 days and 1369 km later, she was caught by a fisherman in Struisbaai, off the CapeCoast. The fisherman had heard that the Two Oceans Aquarium were looking for a star exhibit, and Maxine was shipped to a life of captivity.

That moment was almost a sign for Lesley, after so many years of enjoying and experiencing a great diversity with the ocean, it became clear that sharks and their predicament would be her path. She tells me that she did a lot of soul searching, and “it may sound a bit strange” she says, “but it’s almost as if I was guided to do what I’m doing..”

It’s difficult for me, even though I have only known her for a brief time, to imagine her doing anything else. Going against all that the corporate world had taught her, she left a highly paid  job, cashed in her pension fund, and set up AOCA. The first, and ongoing, project was a need to alter peoples perceptions about sharks, off which 100 million or more are killed annually worldwide. Because of perceptions, people do not care, and those perceptions need changing. Lesley started the Maxine Science, Education and Awareness Programme, or M-Sea, in honour of Maxine, and began the drive to get the funding to begin the project.

For a long time, she struggled to find assistance and sponsorship, with the concern being that the big corporates were wary of the image of being linked to ‘sharks’. In a sad twist of irony, these magnificent animals were even being awarded negative reputations in a boardroom, far from their usual un-truths about shark-attacks. The light at the end of the tunnel came from a phone call from the international conservation organisation called ‘Save Our Seas Foundation’. They had liked Lesley’s proposal,  the funding was cleared, and so began a wonderful partnership.

On a cold, blustery day in March 2004, off Arniston, Lesley and a group of aquarists from the Two Oceans Aquarium slipped Maxine from her ‘mobile tank’ onboard an inflatable craft, and into the ocean. She was free once again, and fittingly, she was joined by Lesley underwater, perhaps a little unsure of this new place. 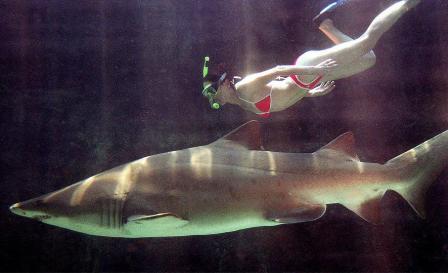 A massive media contingent were present, and thanks to hours of behind the scenes work by Lesley and the staff of the Two Oceans Aquarium, thousands of people were anxiously following the progress of Maxine’s release. The country had watched, on television and newspapers, as the day had drawn closer, yet once Maxine slipped off into the gloom off the Arniston coast, none of those people had witnessed the tears from Lesley. Maxine was gone, and Lesley understood better than most, of the new dangers her friend would face. I’m happy to say that a satellite tag has shown Maxine to be fit and healthy, and moving up the coastline following the eastward migration of the ragged- tooth Sharks. Since then, 2 further sharks, Val and Dee, have both been released, and are faring well. Through this programme, with the support of the Save Our Seas Foundation,  AOCA have reached an estimated 70 million people worldwide, and somewhere out there, the perceptions will be changing. But the wholesale slaughter of sharks needs to stop.

So Maxine, Val and Dee are swimming freely as you read this, all having bid Lesley farewell off the Struisbaai coastline. And as I write this, I reflect on Lesley telling me that she wasn’t sure that what she was doing was enough.

She gave me a some children’s books that she had illustrated for my 7 year old son to pass on to friends. And when I saw his face as he took the books, I saw that she is doing enough. The books explain to my son that perceptions need changing, and they show him how it must be. His friends will see that, and so will their sons and daughters, and so will their sons and daughters, and so the dream will grow. And just as Lesley grew up watching Jacques Cousteau’s work, so my son will hopefully be inspired seeing some of Lesley’s work. And the dream keeps growing.

Scientists Have Been Able to Turn Ocean Plastics Into Pharmaceutical Ingredients

Ocean Warming Shrank Fish Sizes In The Past