Freediving World Records are falling over in the Bahamas at the OriginECN Vertical Blue Freediving Competition. Day 5 of the competition has seen an epic competition in Constant Weight (CWT).

Initially, both received white cards from the judges however after a video review of the dives the judges agreed that Hirose had pulled on the rope outside agreed areas and was hence disqualified.

This means that Artnik’s dive was the only dive to qualify.  Zecchini and Artnik will now share the World Record till it is exceeded.

In a true show of sportsmanship seen in Freediving, Alessia Zecchini the current World Record holder, was on the surface at Deans Blue Hole cheering her fellow athletes on.

Artnik will now go through WADA Anti-Doping tests and all footage will be reviewed by the judges later today.  Once both those things are completed the records will be made officially announced. 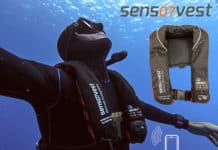