Quintana Roo, Mexico — Venezuelan champion freediver Carlos Coste has achieved a new Guinness record “The Longest Apnea in a Cave.” Carlos achieved his new record apnea in an underwater cave with a linear swim of 150 meters dynamic, that took 2 minutes and :32 seconds to complete in the Cenote Dos Ojos.

Dos Ojos is a flooded cave system located south of Playa Del Carmen and north of Tulum, on the Caribbean coast, in the state of Quintana Roo, Mexico. The exploration of Dos Ojos began in 1986 and to the extent that it has been documented underwater, it is at least 61 km long. Dos Ojos contains the deepest known cave passage in Quintana Roo with 118 meters / 396 feet of depth located at The Cenote Pit.

Carlos Coste World record Freediver in a Cave in Mexico 2010 from Dan Burton Photography on Vimeo.

Carlos Coste is a multiple record-holding freediver and boasts a seven minute breath-hold. Coste had been planning this cave dive for over three years, “I have been doing competitive diving for 10 years and this is by far the most bizarre run I have ever made.“

Coste has a history of “firsts” as he became the first person to decend to more than 100m on a free immersion dive back in October of 2003, and this Guinness Record heralds the first time a freediving record was attempted in underwater caves. “To achieve this is a dream come true for me. I have been interested in speleology [the study of caves] since I was a little boy and to combine this with my profession as a freediver was amazing” said Coste. 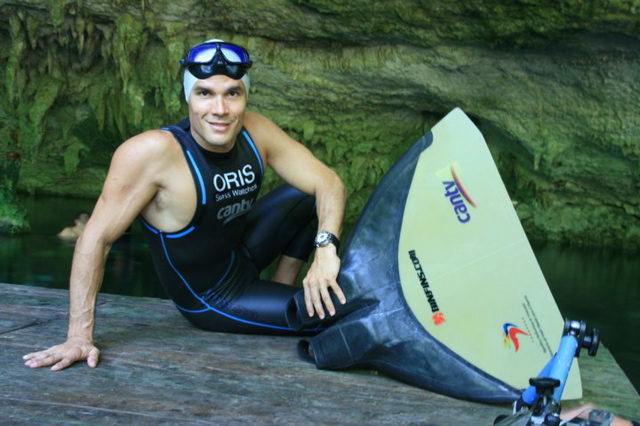 Read more en espanol at Sportalsub.net and at Carlos’ website.