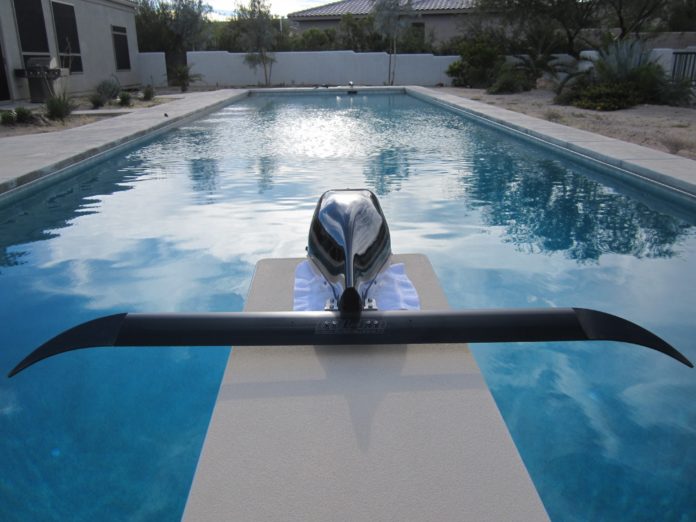 
This review of the Dol-Fin Monofin by Smith Aerospace is written from three perspectives: Mine, Eric Fattah’s, and Connor Davis’. Eric and I have been primarily using the Orca series of Dol-Fin mono fins – the current version of which is the highly refined Orca Mk2 which is the high-end competition fin in the Dol-fin lineup.   Connor is using a recreational model called the X-18 – this is a precursor to the Smith Aerospace mainstream recreational fin – the ‘Pilot’.

The unique feature of all these fins is the use of a pure, high-aspect, foil design.  They work on ‘lift-based’ propulsion – similar to cruise optimized apex predators such as  Tuna, Opah, and Swordfish. (the pectoral fins of the  Opah, which are it’s primary propulsion, closely resemble the Dol-fin foils)

I wanted to get a rounded review from people who use their fins in different disciplines and, rather than cutting and pasting their observations to support my points, I’ve chosen to let them speak for themselves.

The first part of the review focuses on my observations, with Eric in Part 2 and Connor in Part 3.  I have to say that ultimately both Connor and Eric have much more time in-water with these fins than I do so, hopefully, we can present a well rounded review. 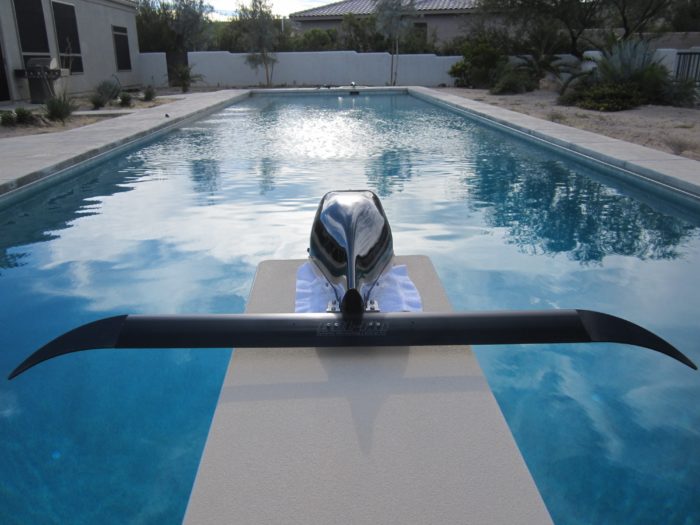 How We Approached This Review

Eric and I each have years of experience with monofins. Eric set the first depth record EVER with a monofin in 2001. He is also among the few divers to have exceeded 100 meters in depth.  He dives mainly in cold water and with a heavy wetsuit. Eric’s portion of this review reflects his prioritization of depth with the Dol-fin Orca Mk-2.

Connor has been freediving for more than four decades. He dives and spearfishes down to around 30 meters, primarily using the FRC technique. He was looking for a fin that is more efficient than bifins, without sacrificing too many of their virtues.  Connor’s portion will focus on spearfishing and reef cruising in temperate waters with the Dol-fin x-18.

Both of them own their Dol-fins and have used them as their primary fins for several years.

I do not own any Dol-fins. Ron Smith has sent me two versions of his flagship fin – the Orca Mk-1.5 and the Orca Mk-2, and one version of his recreational model,  the X-20 (which is most similar to the fin Connor uses and to the new Pilot). He asked me for my frank and direct feedback, and to write this review.

My personal interest is comparing the dynamic performance of the Dol-fin Orca Mk-2 against the type of fin with which it is intended to compete, a state-of-the-art Hyperfin. In this case a distance-tuned (soft) Starfins, with about a 28 degree blade angle.  I have also included observations gleaned from my relatively brief experience with the X-20.

My conclusions reflect my current perspective – but I do not feel my technique yet fully exploits the Dol-fin design.

At the end of Part 3, I’m including a summary of our observations about the Dol-fin line of foil-based monofins. I’ll also include some advice regarding how to approach these fins, depending on your experience. Feel free to skip back and forth from the end to the body of the article. That way you’ll see how the various points in the conclusion are supported by our experiences.

This review is also aimed at assessing the performance of foil-based fins in general.  Where I feel performance is relevant to one version or another, I’ll indicate that with the explicit model name.

I have no financial arrangement with Ron Smith – designer and builder of the Dol-fin line of fins. The fins I have tested are not gifts and there is no incentive for me to give them a positive review.

Technically I have been freediving since I was about 9, but it is only the last 10 years that I’ve pursued it as a discipline. I’ve trained with Eric Fattah, Pete Scott and William Trubridge. I prefer to dive either no-fins, or with a monofin. I’ve not used bi-fins for at least 5 years. I train almost daily with my Starfins Hyperfins. I’ve been through 7 different brands of monofins in the process of finding one that satisfies my criteria (12 fins!!).

I’ve also tested and reviewed a variety of other freediving equipment – including early iterations of the Dol-Fin’s primary competitor – the Lunocet.  In a shameless plug here – I also do freediving photography and you can check out my gallery at http://michiganfreediving.zenfolio.com

I’ve now had one or another Dol-Fin Orca for coming up on two years.

Once more unto the beach! 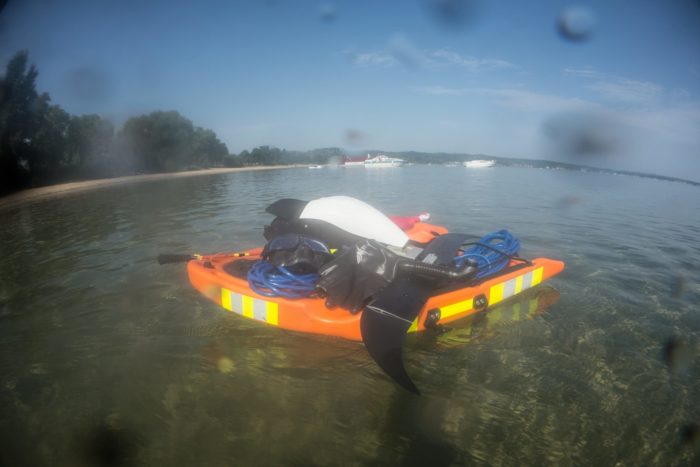 Open water time is sacred.  There’s a lot of tension on the way to the bay; anticipation takes it’s toll.

When my daughter and I go diving, we bicker the whole way there. I punch my other dive buddy if he talks too much.

When people show up while I’m getting ready, and they ask stuff like “Whatdya find down there?.” I say things, literally, like this: “over $600,000 in gold bullion, and WOMEN!” Mostly after that they try to be polite and get away.

One guy lectured me for 20 minutes about how I should have something called a “goody bag”… After all, it’s all about ‘finding stuff’.. isn’t it? “Hey pal, I got yer goody-bag right….” …. Never mind.

So, first time out with the Dol-Fin Orca, I was a mix of excitement and irritation.  I love my hyperfin, and only grudgingly exclude it from my open water dives.

I strapped on the Orca Mk-1.5 with growing hostility.

For the maiden voyage I chose a set of old power-plant cooling pipes that run about one third of a mile out into West Grand Traverse Bay. The pipes provide a nice visual referent for swimming straight. I wanted to focus on the fin’s performance and on technique, not on where I was going.

Once I got horizontal and lofted out into the blue, I found the bottom was going by pretty fast. The fin quickly vanished from my attention and I had to remind myself to think about it.

The Orca design responds really well to good monofin form. On the surface you have to watch your backstroke or it’ll come up out of the water, otherwise the biggest adjustment is the lack of feedback.

You don’t feel anywhere near as much resistance with each stroke as you do with a hyperfin or, for that matter, a pair of bifins.

For me, having already developed decent hyperfin technique, the biggest challenge was not-hunting for that feedback. It’s actually shocking how much territory you cover, and with how little effort.

My first trip out with the Orca Mk-1.5 was unexpectedly fun and easy (once the footstraps were sorted).

The fin responds well to a range of techniques and, at cruising speed, gives very good results with relatively small, soft, movements. Things can be further streamlined by bringing the ankles into play – reducing overall undulation drag. Underway these fins are pretty sweet.

An experienced mono-fin swimmer really needs to pay attention to the effort/distance equation. It does not take much to really move along with the Orca design.

Vertically the Orca Mk-1.5, which had a relatively small blade, was markedly inferior to my Starfins.   It took a lot of work to get down – particularly in a 5mil suit.

Horizontal swims were a much tougher call. I ended up spending hours in the pool switching between my Starfins and the Orca 1.5.   Finally I was able to get in early – when the pool was empty – and shoot some video comparing the two.

This last confirmed what I was feeling. The Orca Mk-1.5, with the small blade, came up short against my Hyperfin in horizontal swims. Not nearly as pronounced a difference as with vertical dives – just a little more effort, a bit less distance and speed. The Orca Mk-1.5 also feels like it has more drag during the glide phase.

The foot strap problem is gone. In fact Ron sent redesigned footstraps to me after I’d been using the Orca Mk-2 for a while, but by then I had the originals dialed in so I didn’t bother installing them. Once they’re set you just click them on.

The Orca Mk-2 is slicker, prettier, and a little longer – leveraging the foil with even less stroke amplitude.

For depth, the Orca Mk-2 with the large or medium blade, easily matched my Starfin. Size matters for depth.

Horizontal swims are more nuanced: Thrust is very clean and efficient – but glide, while better than the Orca Mk-1.5, still feels a little draggy. At my current skill level it’s too close to call.

Foil-based fins like water moving over the foil – just like wings do with air. In the video below watch the background during the second kick – you’ll see a surge of acceleration as the foil gets more efficient against moving water.  The peculiar thing is that, from the perspective of the swimmer, you don’t feel it.

During one of our conversations Ron made the counter-intuitive observation that he thought blade span did not make that much difference in dynamic.

Having tested already with small and medium blades, I requested a large blade for most of my testing with the Orca Mk-2. I’m starting to think Ron is right about blade size in dynamic.  I think the fin is best in dynamic with the intermediate blade – in this configuration it’s performance closely matches my Starfins. (also fits in a suitcase!)

Heres a video of Natalia Molchanova swimming 217 meters with an early Orca model.

You’ve seen what I wrote about dynamic – part 2 we’ll see what Eric Fattah has to say about depth. He’s been using an Orca for much longer than I, and mostly for deep dives (Eric is one of my original inspirations for taking up freediving as a discipline, and is among the real pioneers of modern freediving).