You may not have already heard of James Monnington, but if you are interested in underwater wildlife photography, you will definitely want to take a look at James’ work.

James, a marine ecologist based in London, is currently working on his Ph.D. investigating potential synergies between offshore renewable energy and marine conservation. Much of his research was conducted via SCUBA diving until a severe case of the bends left him wondering if his career in marine biology was over.

Fortunately, James discovered freediving as a safe way to return to depth and discovered the freedom of diving unencumbered by heavy SCUBA equipment. It was then that he picked up a camera and started documenting the bubble-free world around him, which has already resulted in his aerial photo of a blue shark getting shortlisted at the Sony World Photography Awards. We spoke with James to hear more about his freediving journey and passion for wildlife photography.

DeeperBlue.com: You have a very interesting – although rather alarming – story of your journey into freediving. Can you tell us about it?

James Monnington: Yes, my journey into freediving was fairly atypical and not without its dramas. Before I got into freediving I was a keen SCUBA diver, diving wherever and whenever I could. I was assisting on a research project studying thresher shark behavior in the Philippines, SCUBA diving and studying the sharks most days. Around four weeks into the work, after a perfectly normal day’s diving, I was overcome by lethargy and my vision became distorted – classic signs of decompression sickness (DCS).

Initially I tried to deny it, knowing it would mean the end of the trip. However, breathing pure oxygen did nothing to alleviate the symptoms, so I had to give in and accept what I was suffering from. It was time for a trip to the decompression chamber, known affectionately as “the pot.” Two six-hour sessions later and I was pretty much fixed up. But once back in the UK, I got some bad news from the doctors.

I’d suffered Type II decompression sickness where nitrogen bubbles affect the nervous system. Any remaining scar tissue could be “sticky” for nitrogen bubbles, making a second accident much more likely. I could return to SCUBA diving, but I would need to be extremely conservative and not pursue aggressive dive schedules. This pretty much ruled out a career in diving.

Luckily, after a bit of research, I found an alternative to SCUBA diving – freediving. After some formal training and a lot of practice, I can’t really imagine my life without it now!

DB: What about any dangerous or worrying experiences with underwater wildlife or in general whilst freediving?

JM: Not really. A long time ago I got in on my own with a male seal and by the time I’d swum out, he started to make it quite clear he didn’t want me in the water with him; barking, circling me and stirring up sand with his flipper. I calmly but quickly exited the water and learned my lesson.

DB: That sounds nerve-wracking! So what are your favorite animals/fish to photograph? Do you have any particularly memorable experiences with them?

JM: I really love diving with sea lions. They’re incredibly playful and interactive, and their speed, agility, and grace put us to shame. I like to think about how much their high-spirited behavior at the surface must contrast with the seriousness of their offshore, deep-diving foraging expeditions, where they descend to incredible depths and expose themselves to all manner of predators as they search for sustenance.

One experience that really stands out was in the Galapagos. I watched two juveniles playing with a piece of reed they’d found, passing it back and forth and chasing each other’s tails. After about twenty minutes, they included me in their game, racing up, leaving the reed floating in front of me before careening off, disappearing for a few seconds and racing back to reclaim their toy. It was a really special moment that I’ll never forget.

DB: It sounds like you have traveled quite extensively; are there any special places in particular that stood out to you?

JM: Baja California in Mexico is one of my favorite places to dive; the sheer variety of wildlife is mind-boggling. On my last trip, we spent eight days in the water and saw whale sharks, tower-block sized schools of trevally, scores of sea lions, mako sharks, mobula rays, a fin whale, pelagic swarms of squat lobster, and so much more. I can’t recommend it highly enough. To get a taste, as well as a sense of the history there, I recommend reading John Steinbeck’s ‘Log from the Sea of Cortez’, which details a six-week trip he took with his marine biologist friend Ed Rickets in the forties to collect samples and ruminate on man’s place in nature.

DB: Do you have any specific dives in mind for the future? Are there any places you’d love to go and explore one day?

JM: I’m going back to Baja, Mexico at the end of 2018, which I’m really excited about. Next year I’m planning on heading to Tonga to see the humpbacks. They’ve already been photographed extensively, but they’ve always been one of my favorite animals and I’d just love to see them up close and personal. I’m also hoping I can squeeze in a trip to see the Orcas in Norway, but I need to write-up my Ph.D. next year and I have a feeling that’s going to take over the photography for a short while!

Long-term, I’d love to visit the descendants of the pearl divers in Japan (the Ama) and South Korea (the Haenyeo), who are still using traditional freediving methods to collect shellfish and seaweed. As this subsistence lifestyle becomes increasingly difficult, their populations have dwindled, so I think it would be a real privilege to dive with them before their way of life dies out or falls victim to tourist-clichés.

DB: That sounds like an excellent plan! Now regarding your photography in particular: almost all of your photos are in black and white, which is pretty uncommon for underwater photography. Can you tell us why that is and what impact you think this has on your photography?

JM: I wish I could say I had some sort of cerebral, high-concept rationale for shooting in black and white, but the truth is, it’s never really occurred to me to do anything else. I’ve always loved the aesthetic, and I have a particular interest in war reportage, especially from Vietnam. There’s something about the simplicity, the immediacy and the way that it abstracts the environment, distilling the photo down to its core components.

I’ve never wanted to take that classic well-lit, saturated, colorful and super clear photos. They’re beautiful and require a lot of technical skill, but I find it hard to connect with them emotionally, and they don’t really represent my experience of the ocean, which can be very appealing but can also be overwhelming, humbling and intimidating. Quite often, it’s a dark, murky, disorienting and surreal atmosphere, which is a side of the experience that I think is important to share as well. Black and white really helps with this. It can also make taking photos a lot easier when there isn’t much light or color, which is an issue if you are deep and choose not to use artificial lights.

DB: That’s an interesting perspective. So what kind of freediving training do you do, dry or in water, to benefit your underwater photography?

JM: As far as training goes, I generally just train to slowly increase the time I can hold my breath for. I train at a club where I get taught breathing and meditation techniques which help me whilst I’m on my dives. Actually, on a dive, I’ll try to clear my mind, and think about relaxing each muscle in my body one by one, imagining myself melting into the water. I might visualize the dive or watch what’s happening beneath me, but I don’t tend to think about much else. Once ready, I’ll take three final deeper breaths, remove my snorkel, duck dive and kick down to the target depth whilst blowing gently into my nose to equalize my ears and sinus spaces.

As this pressure gradually compresses the volume of your body, your natural buoyancy is overcome by your weight and you become slightly negatively buoyant i.e. you sink (but very slowly at first). This allows you to descend whilst effortlessly freefalling, which is the aspect that many freedivers love the most. Being this relaxed really helps a freedive because when you do start to near your limit, you’re not panicked or stressed and you know you can ascend quickly. This relaxation is hugely beneficial to my photography too – it makes me enjoy the process so much more! 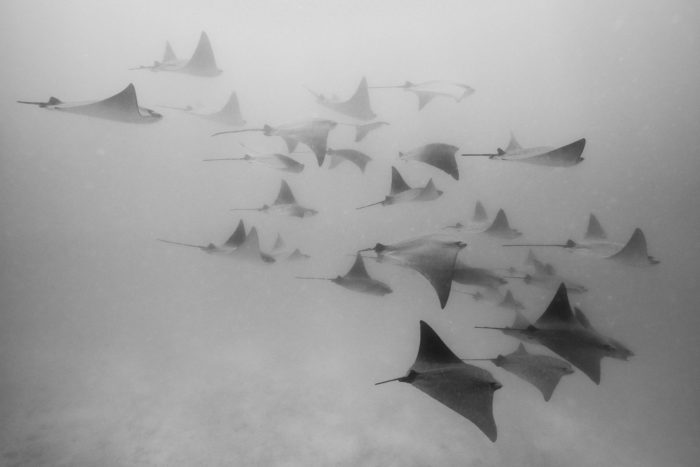 A fever of Golden rays at North Seymour Island in the Galapagos.

DB: What is your favorite photography equipment to photograph with?

JM: As far as equipment goes, I shoot with a Nikonos V camera and a 35mm waterproof rangefinder. It’s small and reliable and perfect for freediving. Its size means it creates very little drag which is essential for freediving, where being streamlined is very important. It’s easy to move about when I’m swimming and isn’t big enough to intimidate any animals you want to photograph.

DB: That is very helpful information! Do you have any other tips for freedivers who want to get into underwater photography?

JM: I think it’s helpful to have a pretty good idea of the types of shots you’re aiming for, as well as the depths you’ll be shooting at and the camera settings you’ll need. Good preparation takes you a long way, even though the element of chance plays a big role in underwater photography. I generally do a fair amount of research into the animals I’m going to see there, and their behavioral patterns too, so I know what to expect from them as well.

To read more of James’ story, check out Freediving with James Monnington.  You can also check out his website or Instagram profile.

Kristina Zvaritchhttp://www.kristinazvaritch.com
Kristina, an AIDA, PADI, and Molchanovs W2 Freediving Instructor, discovered her love for the sea as a PADI Divemaster in Dahab, Egypt, where she shared the Blue Hole with freedivers and developed a serious passion for the single-breath sport. Nowadays, when she isn’t nose-deep in a novel on the beach, Kristina likes to train depth, and often pretends to be a mermaid when her buddy isn't looking.