Editors Note: The freediving world is mourning the loss of the president of AIDA International – Carla Sue Hanson – in February 2020.  We had completed this interview a few weeks before her death and in honor of Carla’s memory are publishing as-is.

Affectionately known as Madame President, Carla Sue Hanson has been President of AIDA (International Association for the Development of Apnea) since 2016 and was recently re-elected for the 2020 mandate.

Hailing from California, USA, Hanson studied Fire Arts at the University of Southern California (USC). She was a world-class competitive swimmer, having represented her country in the Olympics, and this passion for competitive swimming led her to freediving in 2008 with William Trubridge as her instructor, and eventually to competing.

As an athlete, Carla competed in 10 AIDA competitions between the years of 2009 and 2012, both pool and depth, including the prestigious Vertical Blue depth competition in 2010 and 2011. As a competitor, her main specialty was in Constant Weight No-Fins (CNF), due to her strong swimming background. Despite not competing for several years, Carla’s competition ‘personal bests’ remain very respectable; her 46m CNF personal best still ranks her as #8 in that discipline for the US, and her Dynamic Apnea (DYN) PB of 143m, ranks Carla as #6 nationally in that discipline!

These days we most often see Carla sporting her yellow hat and judge shirt at the competition dive line. One of the most widely experienced AIDA judges; having judged upwards of 36 pool and depth competitions, Carla is an ‘A grade’ AIDA Judge, and Judge Instructor, positioning her among a small group of only 19 judges with this highest ranking. Carla has probably witnessed more world records than any other person, having judged the elite Vertical Blue competition since 2012 and multiple World Championships since 2011.

Hanson’s first tenure as President has coincided with very rapid growth in freediving, which has seen an explosion in its visibility on social media. Alongside Carla’s many other roles within the sport, she was a commentator for the 2017 AIDA World Championships in Roatan. This was the first time in AIDA’s history that a World Championships was fully live-streamed with DIVEYE, the underwater drone media system. With an aptitude for explaining the basics of freediving to the inexperienced, Carla was able to bring the sport of freediving to the internet-masses and initiate the first steps in broadcasting to a wider audience.

She was also a regular helping out with the DeeperBlue.com team at various global trade shows – including being the main booth co-ordinator at the annual DEMA Show in the US.

Based in Newport Beach, California, what is less known about Carla is that alongside tirelessly working for AIDA, her frequent travels to AIDA competitions, international dive shows, and visiting her daughter in the UK, she also owns a small design business. Drawing from her studies in Fine Art, her company manages and curates art collections, as well as interior and landscape design, and visual design for events.

Another rarely known fact about Carla is that she has a rich and eclectic taste in music. Having described herself as a “bit of a Goth on the quiet!” to the DJ at the after-party of the Molchanova Grand Prix in Sept 2018, she reportedly requested some of the more obscure David Bowie tracks, including Heroes, and ‘Deep deep down’ by the Love Rockets. As well as this, she is a fabulous cook and loves gardening! Carla has one daughter, China, a doctor of microbiology, who is based in London UK, where she works in two colleges of the University of London.

Carla Hanson is friendly, warm and approachable, but she is also smart, savvy and nobody’s fool. As a judge or jury member, she is serious, calm, diplomatic and extremely fair; her coaching skills can snap anyone out of a post-dive reverie, and she has an uncanny ability to remember absolutely everyone’s name and freediving history! She was kind enough to find time in her incredibly busy schedule to share a little bit about herself with DeeperBlue.com. Read on to get an insight into whom she admires, what freediving has taught her, and her own experiences as a freediving athlete!

DeeperBlue.com: What continues to inspire your freediving?

Carla Sue Hanson: I am committed to promoting the sport throughout the world and trying to make it as safe as possible. AIDA and freediving are growing very quickly and it’s not easy to assure high-quality standards with this growth rate, especially in areas where communication can be challenging. Our biggest obstacle is money. We need to find sponsors to help defray the costs of competition and safety requirements and pay general expenses.

DB: Who do you most admire in the freediving world?

CSH: I most admire the competitors who have been working for years and continue to improve and share their experience and research with everyone. It takes a lot of dedication to remain in a sport and work hard when the financial rewards are not as they might be in other sports.

DB: What is/are your favorite place/s to freedive?

CSH: I still enjoy Long Island, Bahamas the most. It was the place where I did my first successful dives. I’ve been going there for over 10 years now and it feels like a second home with the friends that I have made and a safe and comfortable atmosphere.

DB: Can you tell us about any exciting locations that you would love to freedive?

CSH: I have not been to the Philippines or Indonesia. Those locations are on my list. I’d like to see a sea dragon somewhere, giant cuttlefish, and a nautilus in the wild.

DB: What would be your best piece of training advice for beginner/intermediate freedivers?

CSH: Don’t do what I do! You need to relax, enjoy, and take your time. It’s not a race to the plate or the end of the pool. I don’t have the best mindset to be successful. I’ve never gotten past my sprinter swimming days.

DB: Top freediving athletes favor a variety of cross-training methods. What is your preferred form of dry training and why?

CSH: I don’t dry train. I never liked it when I swam. I don’t like to sweat. Not a fan of yoga, either – for a lot of reasons.  I really like pool training and the clock. I do sets on intervals. Just like swimming training but on breath-hold. My favorite set is 30x50m (long course) dynamic with mono – I do it as fast as I can. That’s 1500m or close to a mile.

DB: What is your pre-dive preference: breakfast or fasting?

CSH: I’m not into static, which I believe requires fasting, but for the ‘moving’ disciplines I think you need to eat a little something. I am currently on a low-carb diet so it would have to be something that fits in that program.

CSH: As I previously stated, I do a low-carb (keto-type) diet. I have found that it is the best way for me to manage my weight and still have energy. You don’t get the carbohydrate crash and full feeling after indulging in pasta or some high-carb food.

DB: What important life-lessons has freediving given you?

CSH: Don’t ever think that you are too old or it’s too late to start a new sport, new hobby, new job, or change your life.  We have the capability to do almost whatever we endeavor to do as long as you are willing to work hard and have an open mind.

CSH: I don’t know. I don’t think that far ahead. I try to stay in the present and just accomplish something worthwhile every day.

DB: Can you describe your most memorable or significant dive?

CSH: It was probably my first ever CWT [depth using a monofin] dive. It was the World Championships in Deans Blue Hole [Bahamas]. I had never done CWT before and I borrowed a fin from my friend Kerian Hibbs and just went for it. It was so easy compared to CNF [depth without fins] that I felt like I was flying and got an easy white card at 50m. Not sure how we would handle that now with the rules on limitations of announcements – lol! I only went to 10m the night before when Alexey [Molchanov] was showing me how to turn.

DB: Which of your achievements are you most proud of, and why?

CSH: It’s not a personal thing but I am proud of the work we do at AIDA. We have people who have made so many significant contributions since our founding 27 years ago. Freediving would not be what it is today without these efforts. I am really grateful to everyone who continues to support AIDA and freediving and those that got us to where we are today. The future is really exciting and I look forward to seeing the sport become more visible and mainstream. 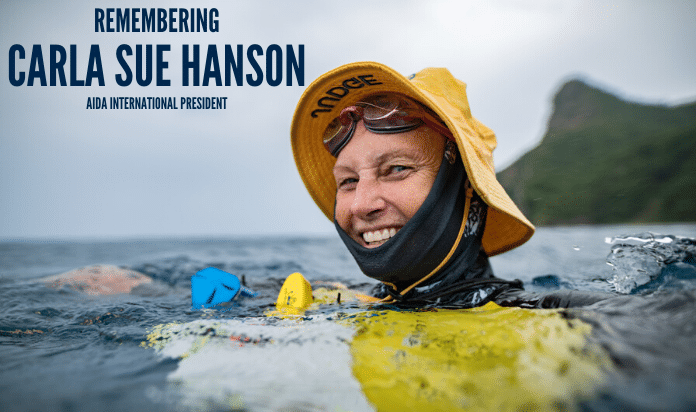 Louisa Collynshttp://www.freedive-ibiza.com
After discovering a passion for freediving, Louisa joined the British team, and competed at the Depth World Championships in 2013, just a year after learning to freedive. An AIDA instructor since 2013, Louisa teaches freediving in Ibiza. She is a member of the AIDA Safety Committee and has been a safety freediver and platform coordinator in international competitions such as Vertical Blue, Carribean Cup, and Blue Element, and is Chief of Staff at Vertical Blue in 2018. She is based in Ibiza, Spain.