As the lights went down in the small screening room I wondered what I was about to see. I’d been speaking to Alki David, the film writer, director and star, for some time and was now sitting waiting for the biggest FreeDiving movie since Luc Besson’s "The Big Blue" to start. 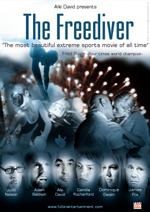 Rumours have surrounded the movie for a while. Several trailers have been put onto the internet, some of which were far from complimentary to the film, and discussions on various forums (including our own) seemed to indicate a rather bad film.

However the first scene came up and for the next 95 minutes we were taken on a journey into the FreeDiving world and into the fictionalised story of Danai Varveri, a young freediver pushed to perform to her limits. The plot draws the usual love interest, friendship, arch-rivals and tragedy which keeps you interested during the whole film, and manages to squash the rumours that have been flying around the internet!

The whole feel is very "The Big Blue" and numerous parallels can be drawn, from the idealistic dreamer (Danai), to a driven competitor (the US diver "Maggie" who just wants to be the best), the sad ending where one of the main characters dies (Enzo in "The Big Blue" and Danai in "The Freediver") even a diving competition judged by a priest is included. Not that these parallels are bad, they certainly help drive the story along and give the film a certain familiar feel. 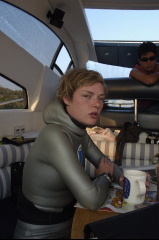 The overall plot involved Danai Varveri (Camilla Rutherford), a young freediver who get persuaded by Hector (Alki David) to train to break a FreeDiving World Record that is currently held by a egocentric American Women named Maggie (Dominique Swain). Danai’s training is overseen by Dr. Viades (Adam Baldwin), a Doctor at the BIOS Institute on the Greek Island of Spetses. The Doctor hides a medical condition from Danai that threatens her life and after the climax of the film, where Danai and Maggie compete directly for the World Record, tragedy strikes.

The film does a good job of providing an enjoyable storyline that will bring more people to the sport of freediving, however i’m sure that the actual FreeDiving community is going to feel slightly disappointed with the film. The realities of freediving described in the film just don’t hold true to FreeDiving physics and physiology.

Real FreeDivers do star in the film, both as actors and stunt doubles. Fred Buyle, a former AIDA executive, plays a judge and AIDA board member, and Danai is played in water by Hannah Stacey, a UK National Record Holder who actually set a British Record whilst filming the movie. British based FreeDivers Zoe Hall and Cecilia Vanman also provided stunt diving during the production and make sure that the underwater footage is realistic and believable.

Overall I enjoyed the film, it entertains for a good 90 minutes and will be a good vehicle to promote the sport of FreeDiving to a more general audience, however it will probably leave trained FreeDivers feeling disappointed.

You can find out more at The Freediver website

You can view the trailer here

Walking Through My Neighborhood