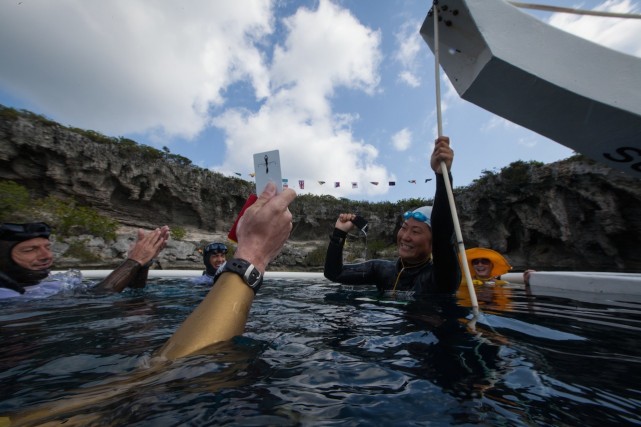 Sayuri Kinoshita is rising. Rising up the ranks of the elite freedivers who can boast garnering a white card from a constant no-fins (CNF) dive at a significant depth. Yesterday on the first day of Suunto Vertical Blue 2015 Kinoshita proved she wants to be back on the winners platform as she completed her no-fins dive to 60 meters in a time of two minutes and :37 seconds, pushing even deeper the Japanese national record she set (herself at 58 meters) during last year’s VB2014.

“Before my dive I felt a little bit nervous and uneasy but then when I entered  the water those feelings disappeared and I became peaceful, calm and relaxed” shared Sayuri, “I really enjoyed the dive, and the first breathe back on the surface was so Saiko!” (which is Japanese for “amazing” or “the best”).

With this CNF performance Kinoshita joins a four-way tie for 4th place in the world in this discipline, along side such talented ladies as Niki Stepankova (née Roderick) of New Zealand, Jeanine Grameijer of the Netherlands, and Natalia Zharkova of Ukraine, who all have also reached the 60m CNF target in competition.

“It’s a honor to be competing here with William Trubridge,” said Sayuri ” it’s such a privilege to watch him dive — his form is beautiful, one that I aspire to. And the blue hole is so mysterious, it makes me excited!” Hopefully that excitement will translate into two more personal bests for Kinoshita, who has set her sights on achieving new PB’s in the two other disciplines of free immersion (FIM) and constant weight CWT. With that goal in mind she is likely to nab another national title in FIM before the event is over. “I really have to thank my coach and friend Ryuzo Shinomiya – without Ryuzo’s help I would not be here,” offered a very appreciative Sayuri.

Deeperblue offers its heartiest congratulations to Sayuri on this remarkable achievement.