The following dispatch has come in from the FIT crew in Dahab: "Today has Martin set new world record in Constant Weight without Fins with flawless dive to -83m. Previous record of -82m was held by William Truebridge from New Zealand."

Ft. Lauderdale, Florida – We could have news of one or more new freediving World Records at any time now. The SONY Free Like No Other event is officially in Game Day One, or, rather, is nearing the end of the event’s first day in Dahab, Egypt. I’m not there – well, Galileo wasn’t in outer space but nevertheless gave us a pretty good account of the solar system, didn’t he? For this one, I’m the Matt Drudge of freediving journalism. I’ve traded in my wetsuit and board shorts for pyjamas, coffee and deodorant. Thank you, internet! 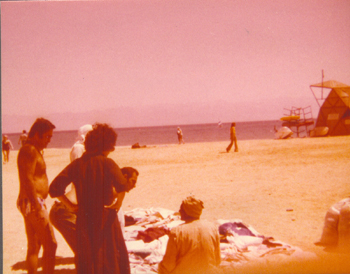 I haven’t personally set foot in the Sinai in over 30 years, and most likely never will again. Places like Dahab and Sharm el Shiekh are, in my recollection, dusty nowheres in a hellish killing field. The inter-war years ( 1967-1973 ) saw some tiny beginnings of tourism to Nueiba and Dahab – if one could call it tourism. I spent some time along that strip of coast back then. It was mostly young Israelis with a smattering of Euros. One went there to get naked, stay naked and smoke lots of hashish. The days, weeks and months oozed by in a purple haze.

There was, of course, the sea. I had my giant Voit mask, with the metal band clamping the glass faceplate in the skirt. It was big enough to use as a shaving basin, which I did. I had a snorkel. No fins. I don’t recall ever seeing anybody else freediving there in those days, but an old friend insists that the kibbutz at Nueiba ( Neviot) had basic diving gear available for rent. I was in the water a lot. It was cold, I remember that, but the land was cruelly, unbearably hot. There were very, very few human beings in the area – a handful of visitors, and the Beduin, of course. 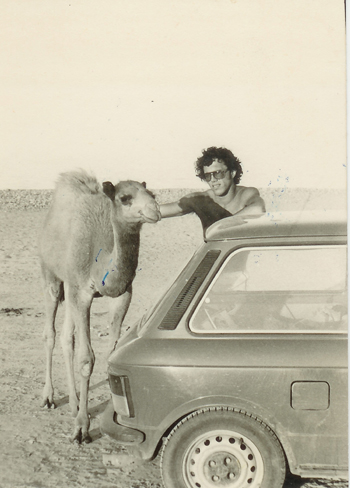 THE BEST FREEDIVER IN DAHAB circa 1970

It’s very strange to me to imagine a Dahab with hotels, swimming pools, telephones, dive shops, and a colony of young foriegners, freedivers in residence in what would have, in 1970, been unthinkable luxury. For some reason, the Dahab Euros like to think of Sinai as being part of the African continent rather than the Asian – continental drift! Plate tectonics! It’s all true! 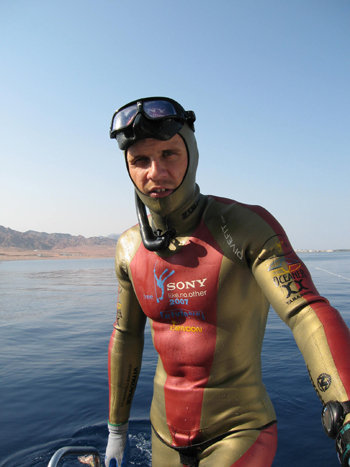 THE BEST FREEDIVER IN DAHAB 2007

Martin and Niki have a great crew with them in Dahab. Martin Prachar, a young Czech safety diver extraordinaire, recounts the lifestyle with a week to go:

Monday July 30, 22:10 With respect to a scheduled late departure of our boat at one o’clock p.m., we did not have the same breakfast as usually for the last fourteen days in row, i.e. pancakes withwatermelon and honey. Everybody could choose his own meal -however, still some of us picked pancakes. As we stay in a hotel about ten minutes by walk on the beach away from our base (LightHouse Dive Center) we regularly meet all the boys inviting tourists to their restaurants and continuously hear their "Hello, Sony, Sony is better than Toshiba etc." thanks to our sponsors t-shirts with event logos. In the morning we finished gas blending for our deep safety team, UW photographer (Petr Vaverka) and off course for our cameraman Pavel Riedl, him being again in shape after some kind of health troubles. Pavel has been facing problems with his CCR rebreather, so he indulged trouble-free operation of his OC today.

Martin’s dive today was planned to 103m FIM. The weather was great for us, no waves, no current, anchoring was fast and easygoing for the first time during our stay in Africa without having to re-anchor it. Martin’s warm up was nice and smooth, equalization was good, timing went ideally as well. So after his breath up, peak inhalation and final packing he was ready to go for the tag and he went down just on the "official top" for his target at 103m below.

Since his dive was planned to be 3:45, David Cani, safety freediver and chief organizer of this attempt, immersed 1:45 after Martin to wait for him at the depth of 30 metres. They both ascended at 3:52 with Martin holding the 103m tag in his hand. Safety deep divers being at various depths [starting from 40m] exactly in compliance with FIT standards began to ascend immediately after Martin’s successful attempt.

When returning to the port, exhausted, hungry and looking forward to our dinner, we discussed our plans for tomorrow and Martin, in addition to his regular stretching and other activities, was telling us a story of how he once ate a dog – he admitted he wasn’t aware of the fact he was eating a dog at that time, but ate a dog, nevertheless.

Tuesday 31.07. 23:59 I guess, the most important event of the day was the arrival of the rest of our fresh support team with the long- awaited doctors who immediately after their arrival provided our cameraman with infusions and other life-saving substances, mainly Antinal [local Egyptian broad spectrum intestinal antiseptic for the treatment of diarrhea & gastroenteritis] supplanting generally utilized alcohol. 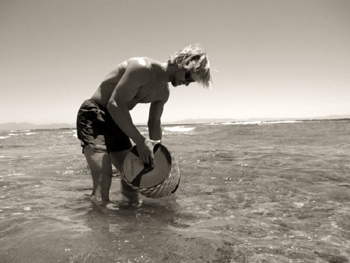 Although it wasn’t 18 years old Single Malt Lagavulin, but some noname whisky bought on plane, still non-chemically bacteria liquidating and stimulative desinfection made us happy quite a lot. During the day the newly coming CCR rebreather divers were tuning their equipment, custom-made cameras for sled and on plate and small UW HDV camera to be handled by support freedivers. As regards Martin’s afternoon dive, he planned 80 meters in CNF, which was a world record not so long ago [Martin’s by the way] and now lies at the depth of 82 meters in this discipline. Time planned for the dive was 3:30. All went well and without complications as usual. After coming to the port and a quick dinner at about half past seven we exchanged greetings with the newly arrived group which had no idea what lay before them.

REVISIT THIS ARTICLE FOR BREAKING NEWS FROM THE SONY FREE LIKE NO OTHER WORLD RECORD FREEDIVING EVENT IN DAHAB, EGYPT