The women’s heat for Constant Weight (CWT) was nothing short of spectacular. Yesterday in Roatan at the AIDA Individual World Championships the women showed up to compete at the highest level. Out of 22 performances, there were 14 glorious white cards, a Continental Record and what I always find to be the most satisfying to watch, athletic personal bests. Two of the day’s four disqualifications were as narrow a miss as you can get on a surface protocol, with one red card handed out for pulling, and a single no-show from the roster.

The first contender to dive for podium status was Alessia Zecchini of Italy. Although Zecchini had manifested her muster in Constant Weight earlier this year when she nabbed the world record at 104m a more reposed strategy was on display yesterday — perhaps something her coach Stephen Keenan may have suggested for her.

“My dive was beautiful and relaxed dive with good sensations, and a little bit narcosis too!” said Zecchini, “I did what we wanted to do in CWT and now I just now what I have to do what I need to in no-fins… Steve told me all.”

It would seem that Alessia’s top priority is to posthumously honor her coach during her time in Roatan, and her two-for-two medal line-up thus far seems to reflect that desire. Zecchini’s constant weight dive to 98m ended up garnering her second place and a silver medal.


The newest member of the 100m club Alenka Artnik decided it was a good day to become a World Champion for Slovenia. In a performance that lasted 3min 23sec Alenka demonstrated she can repeatedly do a 100m dive under constant weight and secured the gold for herself.

Expounded the newly minted world champ in a post dive interview with Alexey Molchanov & Adam Stern who were commentating via Diveye on the women’s different approaches to competition & techniques during their dives.

“I like having the contact via the lanyard at the rope, so I can really relax and I can close my eyes and focus on equalization,” Alenka regaled to Molchanov & Stern. “On my ascent, I want to keep the meditative state as long as possible because it (100m) is a long dive.“

As the threesome chatted CNF World Record Holder Sayuri Kinoshita of Japan was attempting to make a dive to 97m in Constant Weight. “Sayuri is so relaxed!” quipped Stern “Her arm position on ascent is really good.” Which turned the jovial conversation into a constructive technique critique from the world’s deepest man in the discipline towards Artnik. “Alenka, your arm position is a bit tense and needs some work,” coached Alexey — proving that even once a person becomes a world champ there’s still room for improvement at every level. “I’m going to celebrate and call my sister!” proffered Alenka “She loves me very much but has not been talking to me of late because she knows I need my space in a competition.”

In the end Sayuri “perfect-arms” Kinoshita of Japan ended up with a white card after a dive that took 3min 31sec to complete, which was not only the longest dive of the women’s leaderboard but unusually long for the steady athlete as well.

“My sinus condition today was really bad,” shared Sayuri, “I have a cold, stuffy nose and cough…but I didn’t depress me. I was thinking what I can do ‘now’. During my dive I felt how lucky I was here in Roatan and doing freediving 🙂 On the way down I was so relaxed and calm. At the bottom, I even thought I could dive more. On the way up I was so happy and wanted to smile to everyone on the surface 😉 I split my arms open the last 10m because I can feel the water more than when they are streamlined, and I like to feel the water.”

And feel the water she did, cozying right up to a bronze medal in constant weight. The last discipline in the competition (no-fins) is where Sayuri outshines everyone,  so we won’t be surprised if the consistent athlete ends-up taking top honors for the highest score overall.


Stepping up to the plate to continue the day’s success, Sofia Gomez Uribe revealed what she is made of. Strength, poise and glee. Continuing the trend of perfect arms, Sofia’s were exactly where they needed to be, according to Alexey, “Sofia’s arm position is amazing!” exclaimed Molchanov as he watched her ascent, “Sofia was a champion fin swimmer too and you can see the forwards and backwards inflection she gets in her kick.” As a former swimmer himself, you could also hear the pride of association in his observations.

The benefit all of that previous fin-swimming & her invariable training became clear as in a super speedy time of 2min 40sec Sofia burst up from under the water, rapidly executed her required protocol in mere seconds and screeched “YAAAY!” with uncontrollable joy even before her white card performance was validated by the judges. Which it ultimately was, earning her another Continental Record for 96m CWT and even more impressive a personal best (PB) in the most pressure-filled arena of the world championships.

“Today I did a dive to 96m, which is 3 meters more than my competition PB. It was a new dive for me, a depth that I had never attempted before but I was feeling very confident that I could do it, my strategy was not to look at any of the announcements (the night before) so I would just focus on my dive and it worked!! I couldn’t be happier, I think this has been the happiest dive I have ever done,” beamed an exuberant Sofia. “I knew I had it at the bottom. The toughest part (for me) is going down. Today, when I reached the bottom I knew with 100% confidence I had it.”


One more day of rest and then the women take on what some say is the hardest discipline, Constant Weight No-Fins (CNF). See the full roster of results here below. 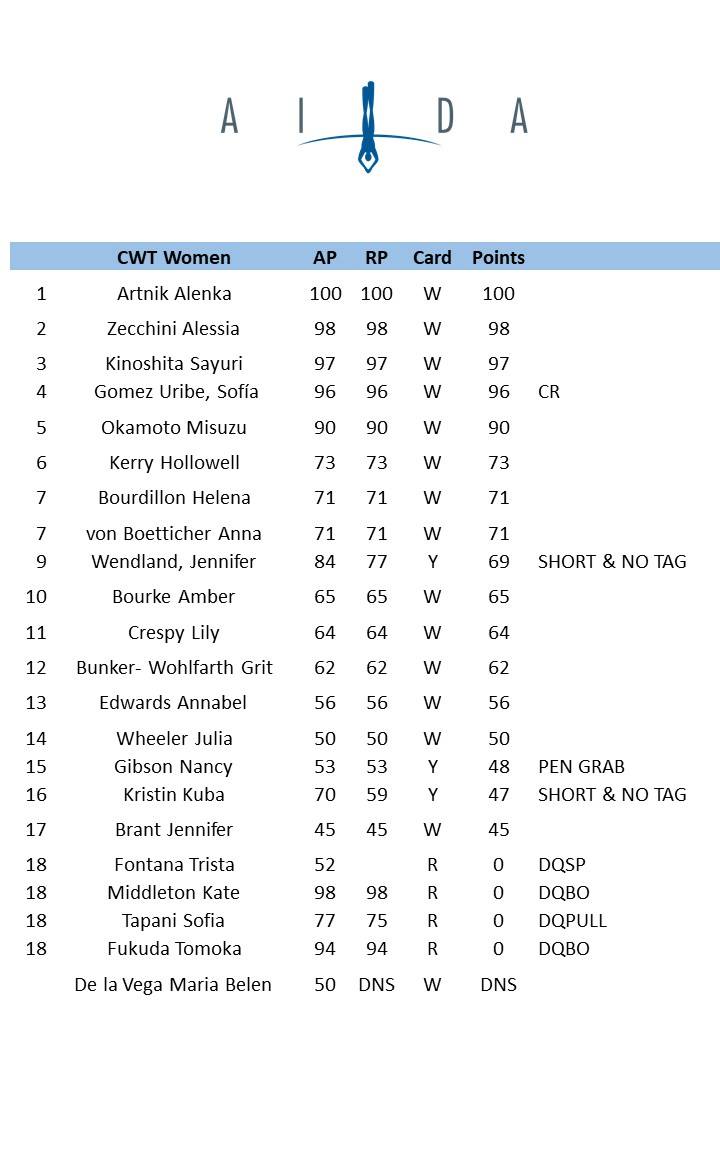