Herbert Nitsch, the Austrian Freediver attempting a 800ft / 244m No Limits Dive today in Santorini (Greece) has been transferred to a decompression chamber in Athens after he reached his goal depth after a dive of 4 minutes 20 seconds.

News being reported is that upon surfacing from his dive he was conscious and communicating.  He immediately requested oxygen and following his standard decompression protocol then proceeded to a depth of 6m-9m to complete a decompression dive for 15 minutes.

Once he surfaced after his decompression stop he reported that he felt much weaker than normal and his condition was assessed as critical enough to require an air transfer to a decompression chamber in Athens.

“The last information received from Athens, is that Herbert was conscious and speaking fluidly at the time he was taken to the hospital. He has been taken into the recompression chamber and is undergoing treatment. Due to the nature of such treatment, which may ongoing for a few hours, we might not be able to provide further updates tonight.

We expect to receive detailed information within tomorrow, Friday June 7th before noon and will provide further update as soon as possible via the usual channels.

Herbert, his family and the team in Santorini wish to thank all those who care about Herbert’s well being.”

We’ve received further word from Herbert’s Management Team which you can read about here. 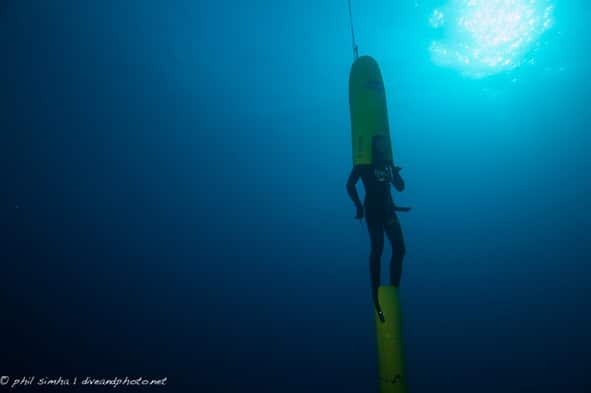