It is a curious thing: Pipin Ferreras’s book The Dive neither persuades nor comforts and yet one cannot look away. This book gets itself read in one sitting, cover-to-cover; to borrow the nominal author’s phrase, it is godamn unstoppable.

The Dive was released in July, 2004 by ReganBooks, an imprint label of  New York publishing giant HarperCollins. Headed by sometime Fox News Channel hostess Judith Regan, the label is noted for ghostwritten tell-alls by persons of considerable (though usually transient) celebrity. Current ReganBooks headliners include How To Make Love Like A Pornstar, by the eminently qualified Jenna Jameson, and American Soldier by General Tommy Franks. The ReganBooks brand whispers that the inside story, the skinny, the dirty lowdown is packed between the covers of each release. Most such books don’t quite deliver, and in this sense Pipin’s book is unexceptional. 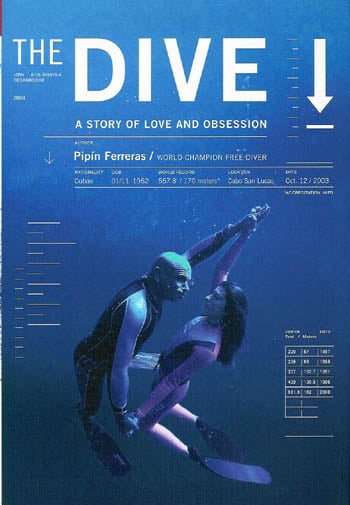 Nobody in the freediving community will find anything new in the way of revelation; closure is not to be found here, nor is fresh scandal. General interest readers with an adventurous bent should find the exposition of diving and the underwater world as interesting as any, and perhaps a little more so than most. It is well-written.

Freedivers will be  irritated by the sorts of misstatements and technical errors common in mainstream media reporting of the sport. Ghostwriter Linda Robertson, a veteran and much-respected Miami Herald sportswriter, took a great deal of time and trouble with her research  but was often overruled by Pipin and by imaginative editors. The uninformed reader will learn, among other things, that excruciating pain in the ears is a routine feature of freediving, caused by “… a water pressure that is eight hundred times denser than air…”.  Not exactly.

Rumors swirled around the production of this book no less so than around its subject matter. Pipin, said the grapevine, was uncooperative and reticent- until he was enthusiastic and micromanaging. Editors quit, editors were fired; so it was whispered in the trade’s afterhours bars in Manhattan.

Then there is the matter of James Cameron and the feature film. In The Dive, the film is presented as a done deal, although this is never said outright.  Cameron’s production company did, in fact, announce it had optioned the story even before the book hit the street. As is so often the case with Francisco Ferreras, one does not quite know what to think. The most recent reliable rumors hold that the film is a non-starter.

The Dive, perhaps inadvertently, is very true to its subject. It is the product of a planful, designing presentation of self  with self-serving ends. Where it is meant to be candid it is, often heart-rendingly so.  Elsewhere  dramatic licence is exceeded and the reader, like those who keep Pipin’s company, is challenged to stretch his credulity. It is, of course, entirely possible that Pipin, in his youth back in Cuba, “…forged a diving mask by melting rubber from Soviet boots around two ovals of glass…”, and if so more power to him. If not, well, it’s damned fine craft, invoking symbols of the cataclysmic global struggle of our time. This is Pipin. The forensic truth of these things is, in the end, beside the point. The point is the legend. The legend is the point.

It is not possible, though, to maintain one’s cyncism and so derive unbridled enjoyment from this story. There is the matter of the lives lost and ruined.

This goes to press 24 hours before the second anniversary of Audrey Mestre’s death.

The book, like the man, insists upon  a paradoxical relationship with the world. Both invest heavily and relentlessly in controlling our perceptions and yet both fail. Control of that sort has got to be perfect to work at all, and Pipin has never achieved the requisite virtuosity. He cannot  pull it off. He always leaves open little windows into his soul, and has done so again in The Dive.

Many such openings are afforded by the several conspicuous omissions of the names of people who played critical roles in the central events of the drama, referred to only as  “the other safety diver” or “a journalist”.  Pipin is not a democrat. It is quite apparent that  he has assigned each and every person he’s met to a very specific circle of the Inferno, to Purgatory or to Paradise, each according to his deeds. The unmentionables are those damned to the deepest abyss.

Other clues are offered when unexpected, undisciplined hyperbole interrupts the flow of the narrative and reveals his emotional charge where the reader has not been led to expect it.

Unless, of course, all this is carefully crafted  manipulation.  With Pipin, one never quite knows what to think. His heart is known by none. A lonely, lonely man.

I don’t really know how The Dive will fly with the general public, or whether the Cameron film will ever be made. Amazon.com, as of this writing, has the book ranked in 36,796th place in sales.  It is the sort of book one finds in a vacation rental house, reads over cold Coronas of an evening and passes on to one’s pal. I think the underlying stories, those of Pipin, Audrey and their lives together, have most of the elements of monumental drama.  This book, though, despite the top-drawer raw material and Linda Robertson’s efforts, does not nearly rise to greatness.

Some readers may conclude that Pipin’s own criticism of Luc Besson’s The Big Blue applies as well to The Dive : “…half fiction, half bad acting.” There’s no way around it, though: it is mandatory reading for freedivers, who will be by turns disgusted, enraged and fascinated. You have to read it. Seconds and used copies are already available at steep discounts on Amazon.com, and would make splendid holiday gifts for the freedivers dearest to you.

Freedivers can gift it to non-freediving significant others as a warning.

Buy "The Dive" from Amazon.com