The average person may not think much about their nose. Unless it is a handy prop for one’s glasses, running from a cold, sore from a punch, or frozen from a Winter’s day, the nose pretty much does its job with little fanfare. While they come in all shapes and sizes, from rounded to angular, majestic to insignificant, wide to narrow, they are, in the end, just a bump on the face…for the average person.

Freedivers, on the other hand, think about their Noses quite a bit. To the casual observer, Freedivers are daring heroes of the depths, adventurous souls who brave the seas without the aid of submarines or scuba tanks, the real-life version of Aquaman. Unlike their tank-dependent brethren, Freedivers accomplish their feats of derring-do with a single breath, slipping under the waves to swim, kick or pull themselves to incredible depths…or traverse epic distances, as they carve through competition pools like dolphins. 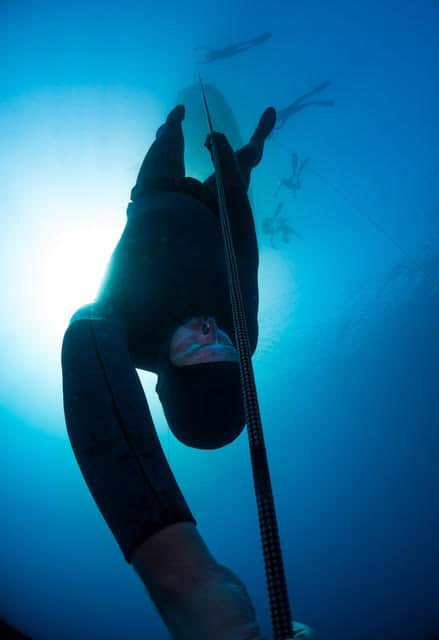 Unlike dolphins, who don’t have a Nose, and can close their air-hole off with a handy ring of muscle, freedivers often need a noseclip. During depth competitions, the noseclip allows the freediver to equalize “hands-free”, keeping a streamlined position and minimizing wasted energy. In pool competitions, the noseclip allows the diver to wear only goggles, or nothing else on the face if they so choose. This allows for a more streamlined profile as well.

This stainless steel wire, with thermoplastic rubber pads on the end, works for Trubridge, who has a regally narrow nose. The simple, bent-wire clip is more than sufficient to close his nostrils and allow for hands-free equalization. But for the rest of us, a more robust and hard-clamping clip is necessary.

The current trend has seen the advent of various types of ratcheting cross bars joining two nose pads together. They can be tightly cranked down by the diver and typically feature robust silicone, thermoplastic or rubber pads to cushion the nose. Usually constructed from molded thermoplastic, these type of nose clips have become popular over the last few years, and their brightly-colored forms can be found dangling from lanyards around many competitive freediver’s necks.

Though a vast improvement over the spring and rubber blob noseclip used in the movie Le Grand Bleu, the new generation of clips are rather bulky and the pads wear out or become dirty and mildew over time. Freedivers demand a noseclip that will not slip off, has few moving parts and is low maintenance.

The TiTAN noseclip represents the newest evolution of the nose-clip and is the brainchild of Marcus Greatwood, founder of NoTanx, a UK-based Freediving Training school.

Recognizing the need for a lighter, more robust noseclip, Marcus enlisted the genius of Industrial Designer Matt Longbottom, who crafted what may be the ultimate noseclip design. Produced by Betatype in their London-based advanced additive manufacturing facility and designed to be a minimalist’s dream, the TiTAN noseclip is constructed of 100% Titanium, making it exceptionally light and nearly indestructible. The many-teethed ratcheting crossbar allows the freediver to adjust the clip as tightly as they want and the unique, no pad design of the nose-pieces are amazingly “grippy”, staying in place on any shape of the nose.

This reviewer wore the TiTAN noseclip in both pools and on depth dives. With a broad and not particularly regal nose, grip and comfort were two characteristics we were especially keen to evaluate. After completing 20 lengths of DYN in the pool, the TiTAN was still in place and still bearable to wear. The weight of the titanium construction was appreciatively lighter in feel than many other nose clips we have evaluated and the thin design offered no discernible resistance in the water.

Taking the TiTAN noseclip to the nearby dive site, we removed it from the chic blue velvet bag it had been provided in, dropped a line off a float and banged out a quick half-dozen dives to around 30 meters, racing to stay in front of a fast-approaching thunderstorm. The TiTAN was slung around our neck on the provided lanyard, ratcheted down on the end of our nose and clung like a limpet throughout the dives. The doughnut-shaped nose-pads were amazingly grippy without any additional pads, never threatening to slide off, even with the addition of sunscreen to our face.

While few of us think clipping a vice to the end of their nose is “comfortable”, there are degrees of acceptability. Many nose clips trade efficiency and a streamlined profile for bulky nose-pads. Other nose clips, especially those designed for swimmers in the pool are just not able to stay clipped on with sufficient force to allow hands-free equalization.

The TiTAN uses a unique, textured titanium doughnut-shaped nose-piece. By cutting out the extra weight and giving a broad surface area to “squeeze” the nose, the TiTAN grips tightly, but spreads the pressure out, resulting in a surprisingly comfortable feel. After an hour in the pool and an hour diving a line, the TiTAN not painful to wear.

Could Dean’s Blue Hole Still Be The Deepest Blue Hole In The World?