So we are at the final day of diving with the F.R.E.E. team here in Kas, Turkey and to complete the week here Yas is doing her last dive to 46m in front of the assembled Media.

We arrive at the boat around 08:30 to setup some photos for the sponsors, only to find a significant number of press already waiting on Yasemin. Film crews, photographer, magazine and newspaper journalists are all waiting to capture a moment with Yas. Rudi and the safety team manage to keep most of the media at bay by putting them all onto a seperate press boat.

After the relevant photos have been taken the boat gets under way, along with a medical team and several V.I.P’s.

During the usual dive briefing Rudi makes sure that everyone understands the rules. Only the safety and media/film teams are to be in the water and under no circumstances should anyone smoke or use mobile phones on the dive boat. Yas was completing her warm-up routines whilst all this was going on, although she kept on being interupted by her agent or people on the boat wanting photos with her. How she could concentrate and relax with everything going on I will never know!

Once we arrive at the dive site several of us head out in the small support boat to take reverse angle photos of Yas completing her breathe up routine on the platform…although fitting 4 people on the boat, all of which are trying to balance and avoid falling into the water with expensive camera equipment…not an easy job!

Finally all photos have been taken, the Press boat has joined the dive boat and everything is set for Yas to start her dive.

Rudi counts down as usual and just after zero Yas slips under the water to the sound of camera clicking and quiet whispers of "Go Yas!".

Shortly after 1 minute Rudi gives his usual signal to indicate that she has reached the bottom. He starts his breathe up routine getting ready to join Yas around 20m. After another 20 or so seconds he slips under the water and everyone is tense waiting to see if she will surface with a clean attempt (remember she completed 46m earlier in the week albeit with a back spasm).

After the 2 minute mark David and I were beginnig to mumble "Uh-Oh" as this is one of her longer dives. However we were proved wrong when she bursts through the surface at 2 minutes 9 seconds and starts her recovery breathes. After several good breathes she hands the tag to the judge and the place explodes with cheering, clapping and the sound of horns blaring. Yas had completed her 46m dive clean and after a 2.5 year break (as well as an operation to remove a tumour) can still set World Records under pressure!

The team is now winding down after a long couple of weeks and the partying will start. As soon as I finish writing this we are all off into the mountains for a traditional turkish dinner at sunset and then I suspect several of the team are going to be enjoying the drinks on offer…all well deserved!

That’s it from me here in Turkey however we will be publishing interviews with members of the team over the next few days. My congratulations go out to Yasemin and David, as well as Rudi and the Safety/Media teams here in Kas and from what I hear, Yasemin might be returning in October/November to set a Variable Record. Watch this space! 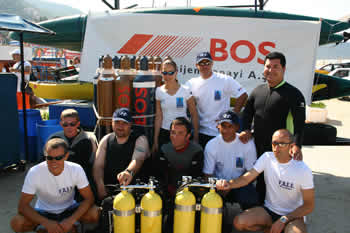 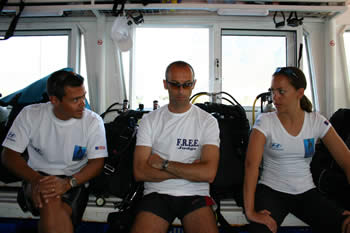 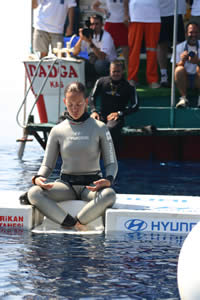 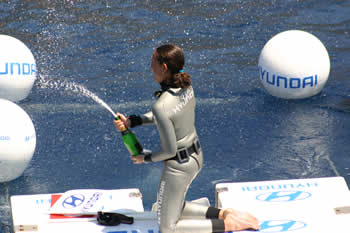 The Oceanic+ App Is Now Available In Multiple Languages