An international pool competition, the SFAC 2016 was organized by Ricardo Paris, (who is a Performance Freediving International instructor) and saw 11 athletes from five different countries including Colombia, Peru, the United States, Venezuela and Switzerland.

The spectrum of experience represented by the 11 freedivers ranged from expert fin-swimmers & national record holders to brand new water enthusiasts who were giving competitive freediving a try for the first time. Ricardo organized an excellent cadre of support crew including safety divers Spencer Ash & Roy Ferreira , both of whom are FII alumni (Freediving Instructors International), and doctor John Shedd was on hand to serve as the event’s medic. Volunteer Bill Lamp’l, from Grove Scuba, rounded out the team with terrific in-water photography & videography support.

On day one the competitors offered their best performances in both static apnea (STA) and dynamic no-fins (DNF). Leo Lupoli of Venezuela surprised everyone, (especially himself!) with a personal best breath-hold of 5 minutes and :46 seconds, having never gone past the three minute mark before that. On day two Claire Paris secured her gold medal with a satisfying dynamic swim of 150 m DYN, coming up clean and fresh as a daisy, which may be related to the fact that her auxiliary coach, Antonio Del Duca, often tells her to “eat the flowers” as she practices!

Despite an exceedingly sleek performance, the last dive of the comp ended in dramatic disappointment, as Colombian Diego Leo Rodriguez sadly received a painful red card. An otherwise gorgeous 200 meter DYN swim was given a disqualification, much to the chagrin of the judges, other competitors and spectators, because his friend/coach high-fived him (DQ touch in SP) before the surface protocol was complete. However, Diego was awarded with the “Best Performance” medal and he promises to be back.

An ecstatic Claire Paris, a previous member of Team USA, had this to say about taking top honors:

“I’m so excited because it’s actually the first time I’ve won a competition overall for the women. It’s also so exciting to have so many new athletes and faces at an event like this. With teamwork and preparation anything is possible and there are no limits!”

In the end the, both the Americans and the Venezuelan’s dominated the leader board:

And Jessica Boumeester of Switzerland was awarded the “Best Newcomer” medal for her three white card performances at her very first competition. Claire’s husband and training partner Ricardo Paris, was thrilled with the success of his inaugural pool event.

“I’m very grateful for the amazing support we’ve garnered from our sponsors Oceaner, Prawno, Born of Water, Waterlust and Grove Scuba and the positive reception we’ve had both here in South Florida and abroad. I’d like to thank everyone for pitching in, especially the AIDA judges and the volunteers who were critical to making this competition a success. I could not be more pleased with the fact that the SFAC has been so we’ll received. While I was originally thinking we’d make it an annualized event, seems like now there’s desire for a “twice-a-year” pool comp so I will see everyone again in six months!”

See a complete list of all of the points and performances from all the competitors here below. 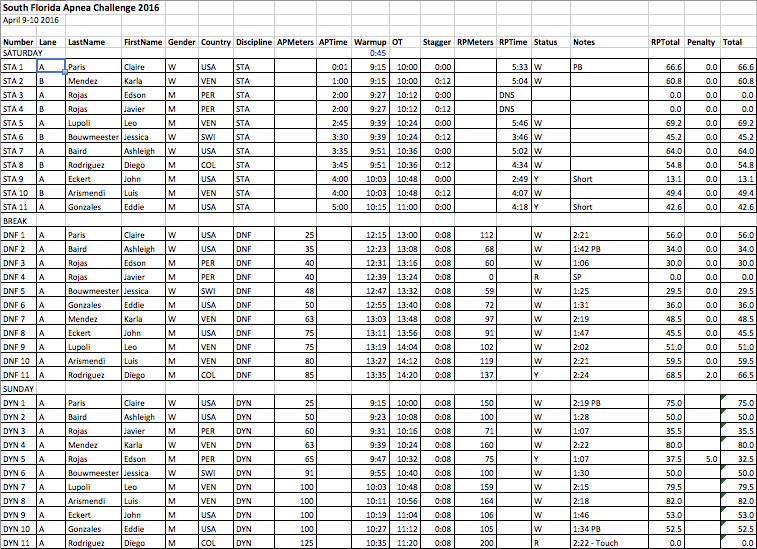