Come August 6, though, the Beautiful People turn away from silicone implants, botox and diamonds to …. bugs.

Bugs. Ugly, creepy, prickly things that look like nothing so much as gigantic roaches. Except they live in the sea.

Anybody with a few dollars can score a lobstering permit at any one of a zillion locations, get in the ocean and gather up to the legal limit of six  of the creatures each day, until March 31, 2006. That is, if the skill and daring are there. It does take a little effort; for scuba divers a little effort, that is, but for the freedivers quite a bit more.

I set out with two buddies from a Biscayne Bay marina just a few days after this year’s season opened.  The dawn rush hour traffic on the Miami roads was murder – like that of any dynamic metro area, I suppose. It was kind of cool to get where I was going and climb aboard a fast, lean power boat instead of planting my butt in an office chair. An hour later we had slashed through a flat calm Atlantic and were well south and east of downtown Miami.  There was nothing in sight – no pleasure boats, no land, nothing but the surreal vision of a perfect tropical sky and the mirage spires of the city towers on a distant horizon.

I’m not at liberty to disclose the location, even in vague terms, of our hunting grounds. South Floridians take their bug-hunting very, very seriously, and I do want to have lunch in this town again sometime. In fact, it may be that I wasn’t really there – so there’s no use in abducting and interrogating me.

The spiny lobster (Panulirus argus) is the game. 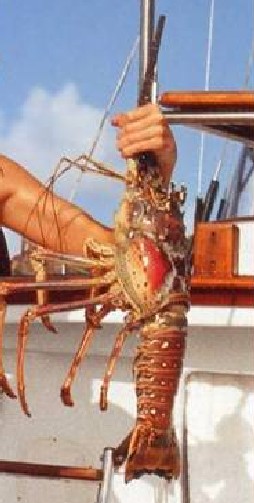 Unlike its Yankee cousin, Homarus americanus, 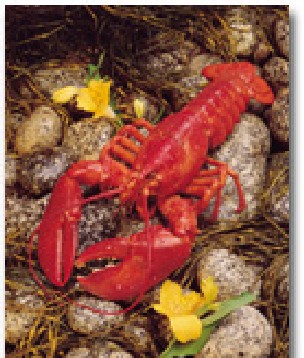 … the lobster of the southern latitudes has no monster claws with the crushing force of an hydraulic press. From a culinary standpoint, some critics fault the southern bug for its lack of claw meat. Others, favored by a more positive attitude toward the cards they are dealt, note that the spiny is all tail all the time.

The spiny lobster is thought to have a life span in the range of 25 – 50 years. The older ones, which are by definition the smarter ones, can grow rather large: the biggest one taken to date weighed in at about 26 pounds and was over 3 feet long.

The bugs hang in the nooks and crannies of the coral reef, sometimes with other critters such as dozing nurse sharks, sometimes alone. The most basic piece of kit required by the sane hunter is a pair sturdy gloves, as the spiny lobster is, well, spiny. Additional tools for the traditionalist are a tickle stick and a net. A tickle stick is ( pay close attention now !) a stick, perhaps a bit less than one meter in length, which is poked into a suspected lobster hole in order to ( surprise !) tickle the creature and cause it to scamper away…with luck, into the hunter’s cunningly positioned net. One never knows, though, just which way the animal will flee, as the reef is a labyrinth and back doors abound. Sometimes they just disappear.

One of my buddies, a captain of American industry in his day job, turned out to be a devastatingly effective lobsterman. His uncanny  instinct for identifying, from the surface, those reef formations most likely to harbor his prey filled his daily quota in short order.

I finished the day empty-handed, but then I had come equipped with a great excuse ( I hadn’t been diving in over a year ) and then imposed upon myself the additional handicap of restricting my equippage to my bare hands. When I was younger, quicker and stupider my practice was to stick my arm into promising crevices and grab the beasts, just like that. Sometimes I  found I had the wrong address, and that I’d offered up my limb to more sinister species than the spiny lobster.

The State of Florida provides the ground rules which insure an abundant population of our prized bugs, year after year. In addition to a permit, all lobster hunters must be equipped with a standardized measuring tool against which the carpace of a dinner candidate must be measured.   Three inches is the minimum for a keeper.

Back at the marina, with the distinctive Miami skyline towering above us, we slaughtered and cleaned the crustacean harvest along with some handsome hogfish and grouper one of the guys had skillfully dispatched with an Hawaiian sling.

Notice that although we took the sea’s bounty as freedivers, I’ve made no mention of the usual data one looks for in a freediving yarn. No depths, no times. I have no idea what the depths were in the 5 spots we hunted that day, and don’t care. All I know is we dived and dived and dived, that the day was perfect, the reef intoxicating and that in addition to our hunting and gathering we were treated to the vision of a pair of gorgeous spotted eagle rays gliding through their domain. We were out all day, so I suppose we made many score dives, but I don’t really know or care what our bottom times were like.

Our game bag said it all.

Look At The Past To See The Future Of Climate Change