Trubridge Powers Through to a New Constant Weight Freediving Record

Today was the penultimate day of Suunto Vertical Blue. And like the seven other days of competition that came before, it did not disappoint. The official top time for the event’s host William Trubridge came at 11:10 am eastern and just about four short minutes later a new national record for New Zealand appeared as he completed a dive to 121m under constant weight in Dean’s Blue Hole. As a freediving event Suunto Vertical Blue has become historic in its proportions garnering an incredible 53 national titles so far. This is Will’s first national record at the elite competition.

Great anticipation has surrounded the Kiwi freediver as onlookers have watched William and Russian freediver Alexey Molchanov battle for first position in the category of constant weight (CWT). Coming into the comp Alexey held the world record for constant weight, and after a few days at Dean’s Blue Hole he retained it by making a dive to 126m. Trubridge is the current world record holder in both free immersion (FIM) and in the sport’s most arduous discipline constant no-fins (CNF).

After a shortfall and a black-out on his own 126m attempt, today was a welcomed good day for the soft-spoken champion. “I just wanted to get a decent, solid CWT dive out and get a white card. The world record escaped me this competition.” Will said matter-of-factly. Upon his ascent to the surface on this 121m dive Will reached for the comp line (the GloRope) but lunged and missed it because he was wearing fluid goggles that distort his vision.

“I was determined to keep my airway above the surface and not get a DQ – my mind was ticking over the 15 seconds – I was lucid.” And as he counted the seconds he managed to masterfully keep his body upright as you will see in the video below. Once   the requisite surface protocol was complete Will was in the clear; ” I felt a little bit of relief!” he mused, “the monofin felt less like an appendage and more like an angry dog gripped to my flailing leg! I think my training peaked just before the event, and I’m on the downhill slope energy-wise…” As for the last day of the competition, Will is planning a ‘fun” dive so he can relax and enjoy the success that surrounds him. 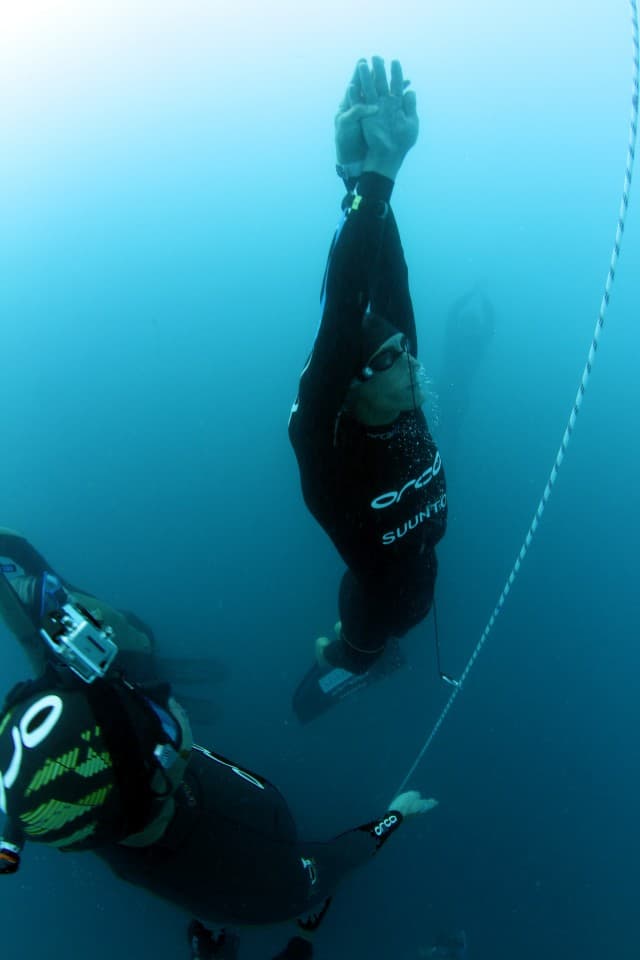