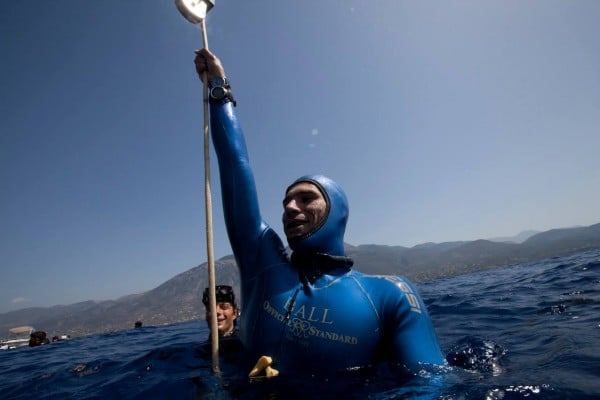 The main event has not yet started but the freediving performances coming out of Greece are nothing short of astounding. On Day 2 of the mini comp (running before the championships) 7 new National Records (NR) were set including:

Not to mention a new world record of 90m FIM for Jeanine Grasmeijer of Holland. And Day 3 was equally as spectacular with another 7 new National Records including an amazing depth performance from Kiwi pool master Dave Mullins.

The video below captures some of the excitement. With Mullins and Néry edging ever closer to Alexey Molchanov’s WR of 126m CWT. The Russian freediver was planning a WR attempt of 128m on the last day of the mini comp but but Alexey was (perhaps) foiled by “Friday the 13th” bad luck as timing delays interrupted his OT when currents tangled the dive lines.

Stay tuned for up to the minute results of the World Championships next week on twitter.