Athletes danced with the Garifuna, touting their many talents out of the water.  Unofficial ceremony winner goes to Iru Balic of Venezula who shook her stuff with her signature flower in the hair and endless smile.  When asked why she comes back to the Caribbean Cup she said,

“It feels like visiting family on freediving Christmas! Smiles, joy and deep diving.”

This year’s event has something else going for it other than a stellar group of competitors.  Caribbean Cup is upping the ante, innovating, doing it’s best to make freediving a spectator sport.  As part of the competition assembly a 50ft glass bottom snorkeling boat is included!  Spectators lined the starboard side of the vessel, checking out athletes from above while inside the boat’s hull, more spectators gazed through glass walls to catch the divers under the water, all while sipping cold drinks and staying dry.  Big depth hitter and even bigger personality, Miguel Lozano of Spain said this of the spectator set up,

“This is the future of spectating in freediving.  Here spectators can watch the dives then interact with freedivers.”

Despite fun at the opening ceremonies and the impressive spectator set up, day one of the Caribbean Cup was still wrought with anxiety.  The air was thick with it, although that could have just been the Roatan heat.   Five national records were announced and not one was realized and made official with a white card.  Not to say athletes won’t eat right,  rest well and give it another try tomorrow.  They will rally for sure.  But day one was big for everyone’s britches and ended in two red cards and seven yellow cards.  There were still some impressive dives realized and big numbers thrown down.  Newcomer, Mark Tilley of the UK stretched his legs with a 68m Free Immersion (FIM) dive, white card performance.  Lozano did not disappoint laying out a 113m Free Immersion (FIM) dive and his first white card of the comp.  Pepe Salcedo of Mexico white carded on a nice 80m Constant Weight (CWT) dive while his compatriot Estrella Navarro-Holm completed a Constant Weight No Fins (CNF) dive to 55m clean as a whistle.

See below for the results from Day 1, and for more information on the competition, go to roatanfreediving.com/caribbean-cup-2016. 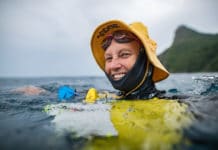