This Saturday the highlight of the international freediving circuit will begin  — the 2013  Suunto Vertical Blue. 36 athletes from 16 countries have already arrived on Long Island, joining dual world record holder and event host William Trubridge, to compete in an annual competition that will take place at Deans Blue Hole, Bahamas over the course of nine days.

Suunto Vertical Blue offers an unmatched setting — the world’s deepest underwater blue hole, and unparalleled athletic performances — including a battle for supremacy between the world’s top freedivers. Among those attending this year is Alexey Molchanov, the current World Record holder in Constant Weight (CWT). Alexey’s record breaking dive to an astounding depth of 128 meters (420 ft) is already mind-boggling but there are hints of greater depths to come. Pursuing him is William Trubridge, current world record holder in the disciplines of CNF and FIM. Trubridge has his eye on reclaiming his national record in CWT as well as improving upon his own, legendary CNF record of 101 meters (331ft).

“The biggest names in men’s freediving will be there and will go to their body’s absolute limit in order to secure a title or medal!” said William Trubridge the organizer of the event. “But Suunto Vertical Blue is more than just an elite competition — it has a very convivial atmosphere that makes it special. We also have people who  are diving to 30-50m right next to the giants in the sport — freedivers are setting personal bests and national or world records at almost every event.” 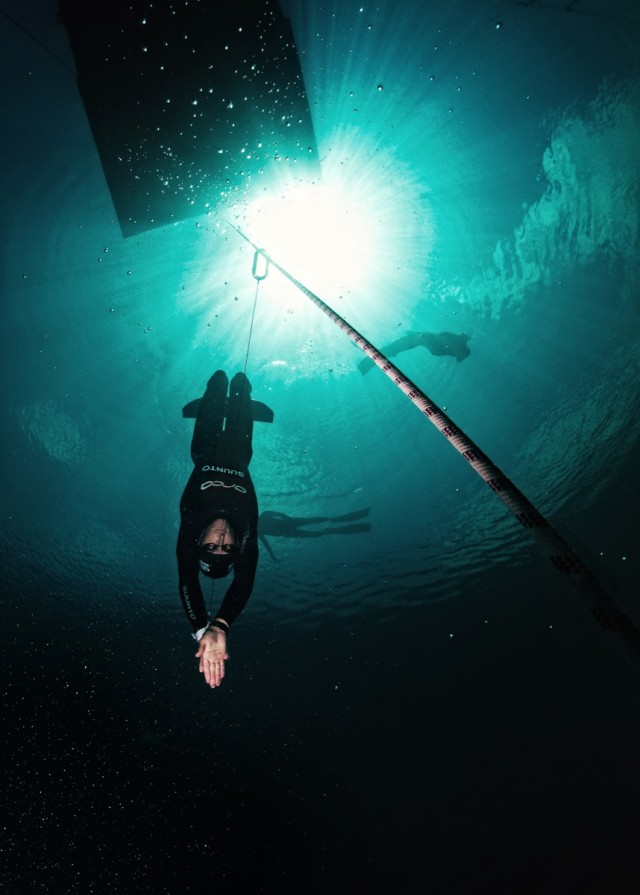 Freediving is a sport that attracts some of the most unique athletes on the planet — men and women who can  plunge to impossible depths in the sea and seemingly hold their breath for an eternity. Competitors at Suunto Vertical Blue will compete in the ocean depth disciplines, which consist of three categories:

-Constant Weight No Fins (CNF): The freediver descends and ascends without any assistance (only using arms and legs without fins).

-Constant Weight with Fins (CWT): The freediver descends and ascends using fins/monofin and the use of arms.

-Free Immersion (FIM): The freediver dives without the use of fins/monofin, but pulls a rope during descent and ascent.

Says Trubridge: “CNF and CWT are the two most popular disciplines. CWT gives the deepest performances, while CNF is seen as the purest expression of human aquatic potential. FIM is more of a relaxed discipline, but there are definitely some very serious practitioners there as well!”

Mika Holappa, Business Unit Director at Suunto Dive comments: “Suunto Vertical Blue is a really unique competition. Dean’s Blue Hole is an amazing location and the freedivers are some of the most inspiring athletes around. We’re very pleased to be supporting this event once again and wish everyone the best of luck.”

Competitors will have six official dives to challenge themselves and their rivals to obtain the coveted Suunto Vertical Blue Championship title. There are also significant prizes to win — including a purse of almost $20,000 in cash, as well as a selection of Suunto D4i and D6i dive computers from the Finnish watch maker Suunto. For daily updates, latest news and spectacular images, check out the Facebook fanpages of Suunto Diving, and Vertical Blue. And DeeperBlue tweeps can also follow the action on Twitter at @Vertical_Blue and at the hashtag #VB2013.