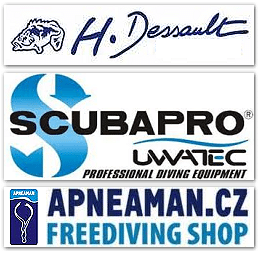 Following on from the success of the World’s Absolutely Freediver Award (WAFA) 2010 where Liv Philip (GB) and William Trubridge (NZ) were crowned absolute Freediver Champions, Apnea.cz has announced the 2011 WAFA.

The WAFA is a competition run by Apnea.cz and looks to rank athletes based on their performances across all six freediving disciplines in a given calendar year – Static (STA), Dynamic With Fins (DYN), Dynamic No Fins (DNF), Constant Weight (CWT), Constant Weight No Fins (CNF) and Free Immersion (FIM).  Results from any public competition and official individual record attempts can count towards an athletes standing as well as any Freediving Federation (AIDA, CMAS, FIPSAS, FFESSEM to name a few).  Apnea.cz has stated that they want to remove the barriers between all federations and allow athletes to be judged on ability.

This year the award is being sponsored by Dessault,Scubapro / Uwatec and FreediveShop.cz.

You can see the results of the 2010 WAFA on the Apnea.cz Website